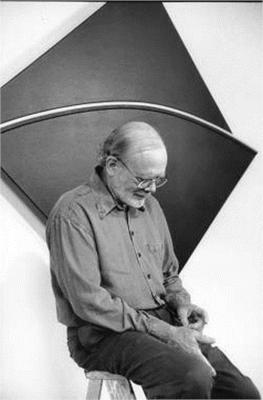 Tony DeLap (born 1927) in Oakland, California, is a West Coast artist, known for his abstract sculpture utilizing illusionist techniques and meticulous craftsmanship. As a pioneer of West Coast minimalism and Op Art, DeLap's oeuvre is a testament to his willingness to continuously challenge the viewer's perception of reality.

Born in 1927 in Oakland, DeLap grew up in the Bay Area and studied art, illustration, and graphic design at several Bay Area colleges, including the San Francisco Academy of Art, and he also attended the Claremont Colleges in Southern California. He returned to the Bay Area, where he taught at the California College of Arts and Crafts, the San Francisco Art Institute and at UC Davis until he secured a teaching position at the newly founded campus of the University of California, Irvine. Tony DeLap has been a mentor to some of California’s notable artists. Bruce Nauman, James Turrell and John McCracken all studied with him. Along with artists such as Ellsworth Kelly, Tony DeLap followed a path of Geometric abstraction and Minimal art embracing the principles of limited color, geometry, precise craftsmanship, and intellectual rigor. Since the early 1960s, he was associated with an emerging movement of West Coast minimalism referred to as "finish fetish," along with several other artists including Craig Kauffman, Larry Bell, and DeWain Valentine.

DeLap's work has been widely exhibited both nationally and internationally. Along with numerous solo exhibitions, DeLap was included in several important group exhibitions of the 1960s including; Primary Structures at the Jewish Museum; American Sculpture of the Sixties at the Los Angeles County Museum of Art; and The Responsive Eye at The Museum of Modern Art, New York City.