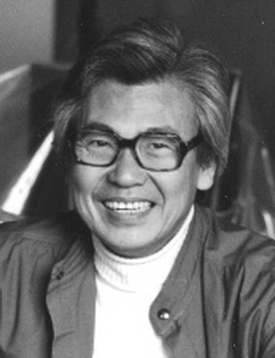 Wen-Ying Tsai (October 13, 1928 – January 2, 2013) was an American pioneer cybernetic sculptor and kinetic artist best known for creating sculptures using electric motors, stainless steel rods, stroboscopic light, and audio feedback control. As one of the first Chinese-born artists to achieve international recognition in the 1960s, Tsai was an inspiration to generations of Chinese artists around the world.

Wen-Ying Tsai was born in Xiamen, Fujian Province, China and emigrated to the United States in 1950, where he attended the University of Michigan, receiving a Bachelors in Mechanical Engineering (BSME) in 1953. Moving to New York City after graduation, Tsai embarked on a successful career as an architectural engineer working for clients such as Walter Gropius, Mies van der Rohe, Synergetics, and Skidmore, Owings and Merrill. While working as an engineer by day, Tsai pursued artistic studies at the Art Students League at night, while also taking courses in political science and economics at the New School for Social Research. Tsai also attended modern dance classes with Erick Hawkins.

In 1963, Tsai won a John Hay Whitney Fellowship for Painting, after which he decided to leave engineering and devote full-time to the arts. After a three-month trip in Europe, he returned to New York and began to make three-dimensional constructions using optical effects, fluorescent paints, and ultra-violet light. These wary works were later selected for The Responsive Eye, an exhibition curated by William Seitz at the Museum of Modern Art in New York.

Unsatisfied with his static sculptures, Tsai began to introduce movement using motors. He created Multi-kinetic Wall in 1965, which was exhibited in Art Turned On at the Institute of Contemporary Art, Boston. Art historian Sam Hunter described the work:

But it was ultimately during a fellowship at the Edward MacDowell Colony in 1965 that Tsai had his "Eureka!" moment. While contemplating the sunlight shimmering in the trees, he had a sudden insight to use his engineering background to create art work that replicates natural phenomena. Finding a starting point in the work of constructivist artist Naum Gabo, Tsai took a quantum leap deciding that "the shimmering was not enough" and that what was needed was a way that the viewer could interact with the work. It was that inspiration that eventually lead him to the idea to use a stroboscope coupled with a feedback control system.:

During this time, along with international friends including Takis, Tsai was a founding member of the Art Workers' Coalition that sought to implement museum reform and underscore "issues relating to the political and social responsibility of the art community."

In 1969, Tsai was invited by György Kepes to the Center for Advanced Visual Studies at MIT. There, amongst the "first Fellows", a lively group of like-minded artists (including Jack Burnham, Otto Piene, Takis, Harold Tovish, Stan VanDerBeek), Tsai met Harold "Doc" Edgerton, the engineer who developed the modern electronic stroboscope.

In the early 1970s, Tsai moved with his family to Paris and showed with the Denise René Gallery and had extensive exhibitions in Europe. During these years, he befriended fellow Chinese artists residing in Paris including Peng Wants and Chu Teh-Chun and became very passionate about cultural exchange between China and the West. In 1979, Tsai and his friend the composer Wen-chung Chou were part of the first delegation of artists from the US to the People's Republic of China. This eventually lead Tsai and his wife Pei-De to establish The Committee for Chinese Artists Intercultural Movement (CCAIM), a pioneering non-profit organization that brought mainland Chinese artists to exhibit in the United States in the 1980s. After Paris, Tsai settled permanently in New York City. From his base in SoHo, Tsai expanded his exhibitions to Asia—Hong Kong, Singapore, Taipei, Nagoya, Beijing. In 2006, Tsai and Pei-De established the Tsai Art and Science Foundation to support and bring awareness to endeavors that are at the intersection of the arts and sciences.