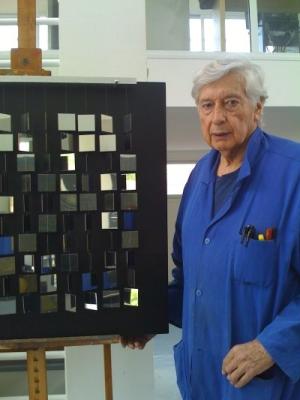 Julio Le Parc (born September 23, 1928) is an Argentina-born artist who focuses on both modern op art and kinetic art. Le Parc attended the School of Fine Arts in Argentina. A founding member of Groupe de Recherche d’Art Visual (GRAV) and award-winning artworks, he is a significant figure in Argentinean modern art.

Julio Le Parc was born into a family of limited economic means. At age thirteen he moved with his mother and brothers to Buenos Aires. While there he attended the School of Fine Arts and showed growing interest in artistic avant-garde movement in Argentina. The School of Fine Arts is where Le Parc, along with fellow artists Hugo Demarco, F. García Miranda, Francisco Sobrino, Horacio García Rossi, Molnar, François Morellet, Sergio Mǫyano Servanes, Yvaral (Jean Pierre Vasarely), and Jöel Stein formed the Groupe de Recherche d’Art Visual, or GRAV.

A precursor of Kinetic Art and Op Art, founding member of Groupe de Recherche d’Art Visual and recipient of the Grand Prize for Painting at the 33rd Venice Biennale in 1966, Julio Le Parc is a major figure in modern art history. The socially conscious artist was expelled from France in May 1968, after participating in the Atelier Populaire and its protests against major institutions.

He currently lives and works in Cachan France.

Julio Le Parc found an interest in art at the age of thirteen when it was evident that, while he was a mediocre student, he was exceptional at sketching portraits and illustration cards. His environment, mainly being the School of Fine Arts significantly influenced the early part of his career. While there he attended night classes while working full-time. Le Parc took a special interest in the avant-garde artistic movements in Argentina: Movement of Arte Concreto Invencion. After attending the School for four and a half years he decided to leave the school and the area. He decides to go travel the country, not speaking to his family for eight years. He later returns to the Academy of Fine Arts, where he takes an active role in student movement groups. After returning, in 1958 Le Parc received a grant from the French Cultural Service to go to Paris, France. Much of his early career was committed to painting, engraving and creating monotypes. However, in 1959 Le Parc begins his experimentation with image produced by light multiplied by layers of planes of Plexiglas. Le Parc participated in his first exhibition, Bienal de Sáo Paulo in Sáo Paulo, Brazil in 1957.

Upon arriving in Paris in 1958 he connected with Jesús Rafael Soto and Carlos Cruz-Diez who were already in Paris. There they met Victor Vasarely, Georges Vantongerloo, Morellet, and Denise René, whom they became friends with. René, a French dealer, was committed to the promotion of abstract art, and later helped launch kineticism. Upon building relationships with these fellow artists and moving permanently to Paris, Le Parc began to paint what came to be known as Surfaces Sequences. These are works in which the progression of forms with slight variations create illusions of rhythmic movements when completed. In 1960 the GRAV group was established with the collective strategy to delegate the creative act to the viewer. The group advocated for art to play a wider and more active role in society.