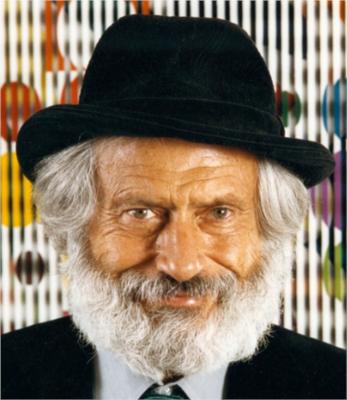 Yaacov Agam (Hebrew: יעקב אגם‎; born 11 May 1928) is an Israeli sculptor and experimental artist best known for his contributions to optical and kinetic art.

Yaacov Agam was born Yaakov Gibstein in Rishon LeZion, then Mandate Palestine. His father, Yehoshua Gibstein, was a rabbi and a kabbalist.

Agam trained at the Bezalel Academy of Art and Design in Jerusalem, before moving to Zürich, Switzerland in 1949, where he studied under Johannes Itten (1888–1967) at the Kunstgewerbe Schule, and was also influenced by the painter and sculptor Max Bill (1908–1994).

In 1951 Agam went to Paris, France, where he still lives. He has a daughter and two sons, one of whom is the photographer Ron Agam.

Agam's first solo exhibition was at the Galerie Craven, Paris, in 1953, and he exhibited three works at the 1954 Salon des Réalités Nouvelles. He established himself as one of the leading pioneers of kinetic art at the Le Mouvement exhibition at the Galerie Denise René, Paris, in 1955, alongside such artists as Jesús Rafael Soto, Carlos Cruz-Díez, Pol Bury, Alexander Calder and Jean Tinguely.

In 1964, Agam wrote his artistic credo, unchanged since then.

Agam's work is usually abstract, kinetic art, with movement, viewer participation and frequent use of light and sound. His works are placed in many public places. His best known pieces include "Double Metamorphosis III" (1965), "Visual Music Orchestration" (1989) and fountains at the La Défense district in Paris (1975) and the "Fire and Water Fountain" in the Dizengoff Square in Tel Aviv (1986). He is also known for a type of print known as an Agamograph, which uses lenticular printing to present radically different images, depending on the angle from which it is viewed. The lenticular technique was executed in large scale in the 30 ft (9.1 m) square "Complex Vision" (1969) which adorns the facade of the Callahan Eye Foundation Hospital in Birmingham, Alabama.

Agam had a retrospective exhibition in Paris at the Musée National d'Art Moderne in 1972, and at the Guggenheim Museum in New York in 1980, among others. His works are held in numerous museum collections including the Museum of Modern Art and the Mildred Lane Kemper Art Museum.

In 1996, he was awarded the Jan Amos Comenius Medal by UNESCO for the "Agam Method" for visual education of young children.

He designed and created the winner's trophy for the 1999 Eurovision Song Contest that was held in Jerusalem.

In 2009, at age 81, Agam created a monument for the World Games in Kaohsiung, Taiwan titled "Peaceful Communication with the World". It consists of nine 10m high hexagon pillars positioned in diamond or square formation. The sides of the pillars are painted in different patterns and hues, totaling more than 180 shades. One side of each pillar is also lined to segment the structure into sections, so that children's perception of the pillar will change as they grow, because they will see a different pillar at a different height.