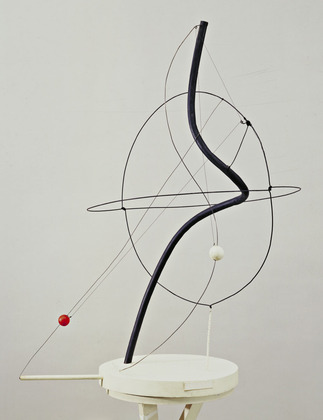 Kinetic art is art from any medium that contains movement perceivable by the viewer or depends on motion for its effect. Canvas paintings that extend the viewer's perspective of the artwork and incorporate multidimensional movement are the earliest examples of kinetic art. More pertinently speaking, kinetic art is a term that today most often refers to three-dimensional sculptures and figures such as mobiles that move naturally or are machine operated. The moving parts are generally powered by wind, a motor or the observer. Kinetic art encompasses a wide variety of overlapping techniques and styles.

There is also a portion of kinetic art that includes virtual movement, or rather movement perceived from only certain angles or sections of the work. This term also clashes frequently with the term "apparent movement", which many people use when referring to an artwork whose movement is created by motors, machines, or electrically powered systems. Both apparent and virtual movement are styles of kinetic art that only recently have been argued as styles of op art. The amount of overlap between kinetic and op art is not significant enough for artists and art historians to consider merging the two styles under one umbrella term, but there are distinctions that have yet to be made.

"Kinetic art" as a moniker developed from a number of sources. Kinetic art has its origins in the late 19th century impressionist artists such as Claude Monet, Edgar Degas, and Édouard Manet who originally experimented with accentuating the movement of human figures on canvas. This triumvirate of impressionist painters all sought to create art that was more lifelike than their contemporaries. Degas’ dancer and racehorse portraits are examples of what he believed to be "photographic realism"; artists such as Degas in the late 19th century felt the need to challenge the movement toward photography with vivid, cadenced landscapes and portraits.

By the early 1900s, certain artists grew closer and closer to ascribing their art to dynamic motion. Naum Gabo, one of the two artists attributed to naming this style, wrote frequently about his work as examples of "kinetic rhythm". He felt that his moving sculpture Kinetic Construction (also dubbed Standing Wave, 1919–20) was the first of its kind in the 20th century. From the 1920s until the 1960s, the style of kinetic art was reshaped by a number of other artists who experimented with mobiles and new forms of sculpture.

The strides made by artists to "lift the figures and scenery off the page and prove undeniably that art is not rigid" (Calder, 1954) took significant innovations and changes in compositional style. Édouard Manet, Edgar Degas, and Claude Monet were the three artists of the 19th century that initiated those changes in the Impressionist movement. Even though they each took unique approaches to incorporating movement in their works, they did so with the intention of being a realist. In the same period, Auguste Rodin was an artist whose early works spoke in support of the developing kinetic movement in art. However, Auguste Rodin's later criticisms of the movement indirectly challenged the abilities of Manet, Degas, and Monet, claiming that it is impossible to exactly capture a moment in time and give it the vitality that is seen in real life.