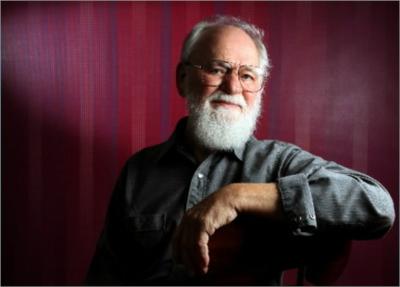 Julian Stanczak (November 5, 1928 – March 25, 2017) was a Polish-born American painter and printmaker. The artist lived and worked in Seven Hills, Ohio with his wife, the sculptor Barbara Stanczak.

Julian Stanczak was born in Borownica, Poland in 1928. At the beginning of World War II, Stanczak was forced into a Siberian labor camp, where he permanently lost the use of his right arm. He had been right-handed. In 1942, aged thirteen, Stanczak escaped from Siberia to join the Polish army-in-exile in Persia. After deserting from the army, he spent his teenage years in a hut in a Polish refugee camp in Uganda. In Africa, Stanczak learned to write and paint left-handed. He then spent some years in London, before moving to the United States in 1950. He settled in Cleveland, Ohio. He became a United States citizen in 1957, taught at the Cincinnati Academy of Art for 7 years.

A key contribution was the fact that the Op Art movement was named after his first major show, Julian Stanczak: Optical Paintings, held at the Martha Jackson Gallery in New York in 1964.

In 2007, Stanczak was interviewed by Brian Sherwin for Myartspace. During the interview, Stanczak recalled his experiences with war and the loss of his right arm and how both influenced his art. Stanczak explained, "The transition from using my left hand as my right, main hand, was very difficult. My youthful experiences with the atrocities of the Second World War are with me,- but I wanted to forget them and live a "normal" life and adapt into society more fully. In the search for Art, you have to separate what is emotional and what is logical. I did not want to be bombarded daily by the past,- I looked for anonymity of actions through non-referential, abstract art."

Stanczak received his Bachelor of Fine Arts degree from the Cleveland Institute of Art, Cleveland Ohio in 1954, and then trained under Josef Albers and Conrad Marca-Relli at the Yale University, School of Art and Architecture where he received his Master of Fine Arts in 1956.

The Op Art movement was named after his first major show, Julian Stanczak: Optical Paintings, held at the Martha Jackson Gallery in New York in 1964. His work was included in the Museum of Modern Art's 1965 exhibition The Responsive Eye. In 1966 he was named a "New Talent" by Art in America magazine. In the early 1960s he began to make the surface plane of the painting vibrate through his use of wavy lines and contrasting colors in works such as Provocative Current (1965). These paintings gave way to more complex compositions constructed with geometric rigidity yet softened with varying degrees of color transparency such as Netted Green (1972).

In addition to being an artist, Stanczak was also a teacher, having worked at the Art Academy of Cincinnati from 1957–64 and as Professor of Painting, at the Cleveland Institute of Art, 1964-1995. He was named "Outstanding American Educator" by the Educators of America in 1970.