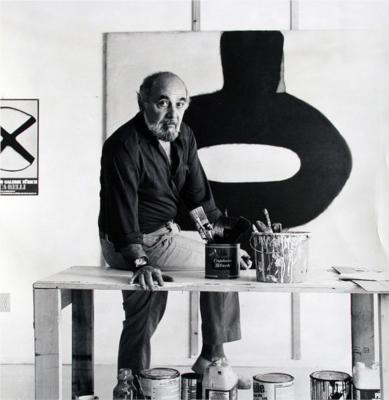 Marcarelli (he changed the spelling later in life) was born in Boston and, with his father Cosimo, brother Ettore, and sisters Dora and Ida, moved to New York City when he was 13. In 1930 he studied at the Cooper Union for a year. He later supported himself by working for the Works Progress Administration, first as a teacher and then with mural painting divisions of the Federal Art Project during this period he won the Logan Medal of the arts. He served in the US Army military service during World War II (1941–1945).

Marca-Relli taught at Yale University from 1954 to 1955 and from 1959 to 1960, and at the University of California at Berkeley. In 1953, he bought a house near Jackson Pollock's home in Springs, East Hampton. As his career progressed, he increasingly distanced himself from the New York School.

He lived and worked in many countries around the world, moving to Parma, Italy with his wife, Anita Gibson, whom he married in 1951. Conrad Marca-Relli died on August 29, 2000, in Parma, at the age of 87.

After the war Marca-Relli joined the "Downtown Group" which represented group of artists who found studios in lower Manhattan in the area bounded by 8th and 12th street between First and Sixth Avenues during the late 1940s and early 1950s. During the late 1940s and early 1950s, he was actively involved in the avant-garde art world in Greenwich Village. These artists were called the "Downtown Group" as opposed to the "Uptown Group" established during the war at The Art of This Century Gallery.

His first one-man show was in New York City in 1948. In 1949 Marca-Relli was among the founders of the "Artists' Club" located at 39 East 8th Street. He was selected by his fellow artists to show in the Ninth Street Show held on May 21-June 10, 1951. The show was located at 60 East 9th Street on the first floor and the basement of a building which was about to be demolished.

Conrad Marca-Relli was among the 24 out of a total 256 New York School artists included in the Ninth Street Show and in all the following New York Painting and Sculpture Annuals from 1953 to 1957. These Annuals were important because the participants were chosen by the artists themselves.