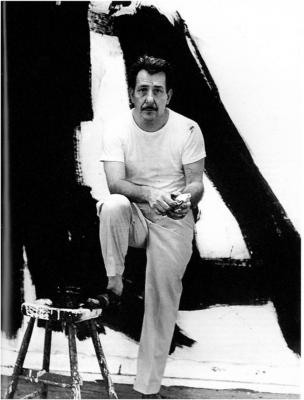 Franz Kline (May 23, 1910 – May 13, 1962) was an American painter. He is associated with the Abstract Expressionist movement of the 1940s and 1950s. Kline, along with other action painters like Jackson Pollock, Willem de Kooning, Robert Motherwell and Lee Krasner, as well as local poets, dancers, and musicians came to be known as the informal group, the New York School. Although he explored the same innovations to painting as the other artists in this group, Kline's work is distinct in itself and has been revered since the 1950s.

Kline was born in Wilkes-Barre, a small coal-mining community in Eastern Pennsylvania. When he was seven years old, Kline's father committed suicide. During his youth he moved to Lehighton, Pennsylvania and graduated from Lehighton High School. His mother later remarried and sent him to Girard College, an academy in Philadelphia for fatherless boys. After graduation from high school, Kline studied art at Boston University from 1931 to 1935, then spent a year in England attending the Heatherley School of Fine Art in London. During this time, he met his future wife, Elizabeth V. Parsons, a British ballet dancer. She returned to the United States with Kline in 1938.

Upon his return to the country, Kline worked as a designer for a department store in New York state. He then moved to New York City in 1939 and worked for a scenic designer. It was during this time in New York that Kline developed his artistic techniques and gained recognition as a significant artist.

He later taught at a number of institutions including Black Mountain College in North Carolina and the Pratt Institute in Brooklyn. He spent summers from 1956 to 1962 painting in Provincetown, Massachusetts, and died in 1962 in New York City of a rheumatic heart disease, ten days before his 52nd birthday.

Kline's artistic training focused on traditional illustrating and drafting. During the late 1930s and early 1940s Kline worked figuratively, painting landscapes and cityscapes in addition to commissioned portraits and murals. His individual style can be first seen in the mural series Hot Jazz, which he painted for a New York bar in 1940.

The series revealed his interest in breaking down representative forms into quick, rudimentary brushstrokes.

The personal style he developed during this time, using simplified forms, became increasingly more abstract. Many of the figures he depicted are based on the locomotives, stark landscapes, and large mechanical shapes of his native, coal-mining community in Pennsylvania. This is sometimes only apparent to viewers because the pieces are named after those places and objects, not because they actually look like the subject. With the influence of the contemporary New York art scene, Kline worked further into abstraction and eventually abandoned representationalism. From the late 1940s onward, Kline began generalizing his figurative subjects into lines and planes which fit together much like the works of Cubism of the time.

In 1946 the Lehighton, Pennsylvania Post of the American Legion commissioned Kline to do a large canvas depicting the town where he had attended high school. The work now known as The Lehighton Mural was later acquired from the American legion post by the Allentown Art Museum in Allentown, Pennsylvania and is today on permanent exhibition there.