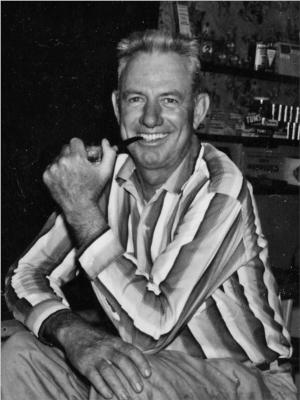 Forrest Bess (October 5, 1911 – November 10, 1977) was an American painter and eccentric visionary. He was discovered and promoted by the art dealer Betty Parsons. Throughout his career, Bess admired the work of Albert Pinkham Ryder and Arthur Dove, but the best of his paintings stand alone as truly original works of art.

Born October 5, 1911, in Bay City, Texas, Bess picked up his love of art from his mother. His father worked in the oil fields and ran a bait fishing camp of the Texas coast in Chinquapin.

A semi-migrant childhood was followed by some years at college, where he began by studying architecture, but found himself diverted into religion, psychology, and anthropology, readings that would later inform his own radical theories. Dropping out of university in 1932, Bess worked for several years roughnecking in the Beaumont oil fields, and also made several trips to Mexico.

During World War II, he enlisted in the Army Corps of Engineers and was given the task of designing camouflage. He suffered a psychological breakdown and left the service.

After living for a while in San Antonio, he finally settled at his family's fishing camp at Chinquapin, near Bay City. Bess lived his life there in virtual isolation, on a strip of land accessible only by boat. "I try to tell myself that only by breaking completely away from society can I arrive at a reasonable existence."

He worked as a commercial fisherman, but painted in his spare time. He experienced visions or dreams, which he set down in his paintings. It was during this time he began to exhibit his works, earning one-person shows at museums in San Antonio and Houston. During his most creative period, 1949 through 1967, Betty Parsons arranged six solo exhibitions at her New York City gallery.

Bess was never comfortable for very long around other people, although he hosted frequent visitors to his home and studio at Chinquapin: artists, reporters, and some patrons made the trip to the spit of land on which Bess's shack stood. He did forge lasting relationships with a few friends and neighbors, and maintained years-long friendships and correspondence with Meyer Schapiro and with Betty Parsons.

But ultimately Bess preferred solitude, and his prolific activities as an artist, highlighted by limited notoriety and success, alternated with longs spells of loneliness, depression, and an ever-increasing obsession with his own anatomical manifesto.

In the 1950s, he also began a lifelong correspondence with art professor and author Meyer Schapiro and sexologist John Money. In these and other letters (which were donated to the Smithsonian Archives of American Art), Bess makes it clear that his paintings were only part of a grander theory, based on alchemy, the philosophy of Carl Jung, and the rituals of Australian aborigines, which proposed that becoming a hermaphrodite was the key to immortality. He was never able to win any converts to his theories or validation from the many doctors and psychologists with whom he corresponded. In his own home town of Bay City, he was considered something of a small-town eccentric.