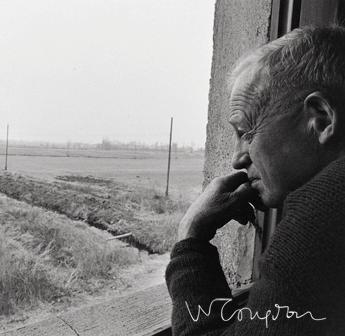 William Grosvenor Congdon (April 15, 1912 in Providence, Rhode Island – April 15, 1998 in Milan, Italy) was an American painter who gained notoriety as an artist in New York City in the 1940s, but lived most of his life in Europe.

William Grosvenor Congdon was born on April 15, 1912, in Providence, Rhode Island, the second child of Gilbert Maurice Congdon and Caroline Rose Grosvenor, who married in 1910. Both parents came from rich families: the Congdons dealt in iron, steel and metals, while the Grosvenors owned a textile manufacturing business in Rhode Island. They had five children, all sons. William Congdon was the cousin of Isabella Stewart Gardner (the American, poet-critic Allen Tate's second wife) who is spoken of in personal letters between Allen Tate and Jacques Maritain (see pages 77–79 in John M. Dunaway's Exiles and Fugitives: The Letters of Jacques and Raissa Maritain, Allen Tate, and Caroline Gordon).

After graduating from St. Mark’s School of Southborough, Massachusetts, he studied English Literature at Yale University and graduated in 1934. His cousin on his mother's side was poet Isabella Gardner. For three years, Congdon took painting lessons in Provincetown with Henry Hensche, followed by a further three years of drawing and sculpture lessons with George Demetrios in Boston and then Gloucester. For some months in 1934-35 he frequented the Pennsylvania Academy of the Fine Arts in Philadelphia.

After the United States entered the Second World War, Congdon (on April 20, 1942) signed a one-year contract as a volunteer ambulance driver with the American Field Service (in the end, he would serve a total of three years). He served with the British 9th Army in Syria, and with the British 8th Army in North Africa (El Alamein), Italy (where he took part in the Battle of Montecassino) and Germany: as a member of the C Platoon of AFS567 (Coy) he was one of the first Americans to enter the Nazi death camp of Bergen Belsen.

Apart from a few brief visits to the USA, he used all his leave during this period to visit cities, art monuments and exhibitions (he himself would organize a ceramics exhibition in Faenza in March 1945). During the war, Congdon made drawings of the people and places he encounters and recorded his experiences in a diary and in letters to his parents. Only a few months after his return to the United States, he left again for Italy, as a volunteer with the Quaker American Friends Service Committee to help rehabilitate the most stricken areas, distributing aid to war victims and rebuilding villages in Molise.

Congdon went to live in New York in February 1948, renting a room on Stanton Street in the Bowery. From this point up, cities would become a leitmotif of his painting; the city was seen as the setting of history, as the site of social tensions and dramas. The first depictions of New York - crumbling façades of cheap buildings, jittery, nervously-penned windows that offer no dominant perspective over a heaving urban magma - seem to reflect the same moral criticism that can be seen in his war drawings.