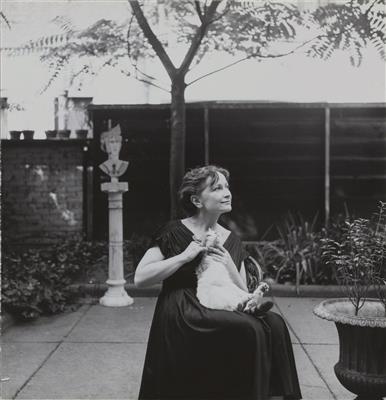 Hedda Sterne (born Hedwig Lindenberg) was an artist best remembered as the only woman in a group of Abstract Expressionists known as "The Irascibles" which consisted of Jackson Pollock, Willem de Kooning, Barnett Newman, Mark Rothko, and others. Sterne was, in fact, the only woman photographed with the group by Nina Leen for Life magazine in 1950. In her artistic endavors she created a body of work known for exhibiting a stubborn independence from styles and trends, including Surrealism and Abstract Expressionism, with which she is often associated.

Sterne has been almost completely overlooked in art historical narratives of the post-war American art scene. At the time of her death, possibly the last surviving artist of the first-generation of the New York School, Hedda Sterne viewed her widely varied works more as in flux than as definitive statements. In 1944 she married Saul Steinberg the Romanian-born American cartoonist and illustrator, best known for his work for The New Yorker.

Hedda Sterne (August 4, 1910 – April 8, 2011) was a Romanian-born American artist who was an active member of the New York School of painters. Her work is often associated with Abstract Expressionism and Surrealism.

Sterne was born as Hedwig Lindenberg in Bucharest, Romania, on August 4, 1910. She was the daughter of Jewish parents Eugenie (née Wexler) and Simon Lindenberg, a language teacher. Her older brother and only sibling, Edouard Lindenberg (1908-1973), would become a prominent conductor in Paris.

As a young child, Sterne and her brother were educated in music and languages. In addition to Romanian, Sterne was taught to read German, French, and English. She would recall the importance of German philosophy texts and art history books in her development as an artist. Initially encouraged to study piano, Sterne eventually succeeded in convincing her parents to allow her to study art instead. With the encouragement of Max Hermann Maxy, whom Sterne recalled as a student of her father's, she began formal training in 1918. Sterne's first art teacher was Maxy's former professor at the Bucharest National University of Arts, the sculptor Frederic Storck.

In 1919, Sterne's father Simon died and her mother remarried. By 1921, Sterne was attending the Institutul de Domnişoare Choisy-Mangâru, a private girl's school in Bucharest.

In the late 1920s, Sterne traveled regularly to Vienna, where she took classes in ceramics at the Kunsthistorisches Museum. In 1929 she enrolled at the University of Bucharest where she studied art history and philosophy with various notable intellectuals, including Tudor Vianu, Mircea Florian, and Nae Ionescu. In 1932 she married Frederick (Fritz) Stern (1905-1982; later known as Fredrick Stafford) and discontinued her formal education.

In addition to her early work in the studio of Frederic Storck, Sterne was one of several young artists in Bucharest working in the studio of Dada-cofounder and Surrealist painter Marcel Janco, who had returned to Bucharest from Switzerland and France in 1921. Sterne became an active member of Bucharest's thriving avant-garde communities of artists and writers, and in this way, as she would recall, she "grew up with Surrealism." Among her closest friends were Constructivist and Surrealist artist Victor Brauner, his brother Théodore Brauner and their family; painters Jules Perahim and Medi Wexler, and Wexler's future husband, the surrealist poet Gheorghe Dinu.

Beginning in the late 1920s and following her marriage to Fritz Stern in 1932, Sterne traveled frequently between Bucharest and Paris, where she studied briefly in the ateliers of Fernand Léger and André Lhote, and at the Académie de la Grande Chaumière. Often reconnecting with Victor Brauner in Paris in the 1930s, Sterne closely followed developments in Surrealism and attended exhibitions. She was particularly drawn to the Surrealist practice of automatism and by the late 1930s had developed her own unique method of constructing automatic collages. Some of these works were included in the Association Artistique Les Surindépendants' 11th Exposition du Salon des Surindépendants at the Porte de Versailles, where they drew the attention of Hans Arp. The following year, her work was shown in the Société des Artistes Indépendants' 50th annual Salon des Indépendants.