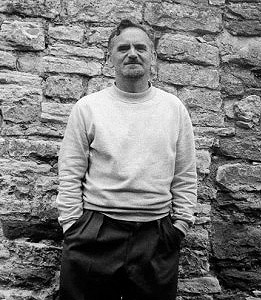 William Scott CBE RA (15 February 1913 – 28 December 1989) was a British artist, known for still-life and abstract painting. He is the most internationally celebrated of 20th-century Ulster painters.

William Scott was born in Britain on 15 February 1913, in Greenock, Scotland, to Scots-Irish parents, in 1924 his family moved with his mother, Agnes to Enniskillen, County Fermanagh, Northern Ireland, to join his father in his native town. His father was a housepainter and signwriter, and was killed in an accident in 1927 while trying to save lives in a local fire. William was educated at the Model School and attended night classes in art at the Technical School, taught by Kathleen Bridle. In 1928 he went on to Belfast College of Art, and in 1931 he won a scholarship to the Royal Academy Schools in London. There he won a silver medal and became a Landseer scholar in painting. In London he shared rooms with three Swansea men, the painters Alfred Janes and Mervyn Levy and the poet Dylan Thomas. He was awarded a Leverhulme scholarship in 1935.

Scott married in 1937, and for the next two years lived abroad, mostly in Italy and in France, where he founded an art school in Pont-Aven, Brittany.

However, in 1939 after the declaration of World War II he returned abruptly to Britain, leaving much of his work in the hands of Julia Correlleau for safe-keeping. For six months he was in Dublin, where his first son, Robert, was born. During the early years of World War II he helped to run an art school in Bath, Somerset. In 1941 he settled in Hallatrow, High Littleton, Somerset. In July his second son, James, was born in Wells. In 1942 he volunteered for the navy, but was accepted for the army, and after serving with a number of regiments he became attached to the Royal Engineers, with whom he served until 1946 and where he learned lithography in the map-making section.

In 1946 Scott returned to Pont-Aven to recover his pre-war work, but failed to find it. From 1946 until 1956 Scott was senior lecturer in painting at the Bath Academy of Art. In the summer of 1953 he visited the USA where he met Jackson Pollock, Elaine de Kooning, Franz Kline and Mark Rothko. Although his work had become predominantly abstract in 1952, after his meeting with the American Abstract Expressionists., he reverted to his roots in still life and European painting.

Scott represented Britain in 1958 at the Venice Biennale. He exhibited at the Hanover Gallery in London, at the Martha Jackson Gallery in New York, Italy, Switzerland, West Germany, France, the Kasahara Gallery in Japan, Canada and Australia, as well as Belfast and Dublin. Retrospectives of his work were held at the Tate Gallery, London in 1972, in Edinburgh, Dublin and Belfast in 1986, by the Irish Museum of Modern Art, Dublin in 1998 and the Jerwood Gallery in 2013.