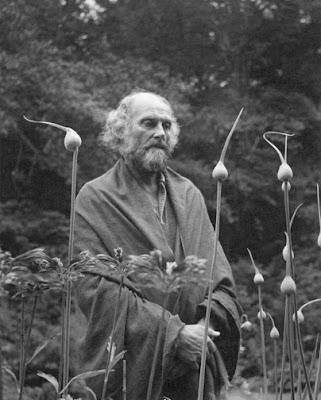 "Morris Graves in His Leek Garden" by Imogen Cunningham, 1973

Morris Graves (August 28, 1910 – May 5, 2001) was an American painter. He was one of the earliest Modern artists from the Pacific Northwest to achieve national and international acclaim. His style, referred to by some reviewers as Mysticism, used the muted tones of the Northwest environment, Asian aesthetics and philosophy, and a personal iconography of birds, flowers, chalices, and other images to explore the nature of consciousness.

An article in a 1953 issue of Life magazine cemented Graves' reputation as a major figure of the 'Northwest School' of artists. He lived and worked mostly in Western Washington, but spent considerable time traveling and living in Europe and Asia, and spent the last several years of his life in Loleta, California.

Morris Cole Graves was born August 28, 1910, in Fox Valley, Oregon, where his family had moved about a year before his birth, from Seattle, Washington, in order to claim land under the Homestead Act. He was named in honor of Morris Cole, a favored minister of his Methodist parents. He had five older brothers, and eventually, two younger siblings.

Constant winds and cold winters made it much more difficult than expected to establish a working farm, and the struggle led to bankruptcy of the senior Graves' once-thriving paint and wallpaper store in Seattle. In 1911, a few months after Morris' birth, the family returned to the Seattle area, settling north of the city in semi-rural Edmonds, Washington.

He was a self-taught artist with natural understandings of color and line.

Graves dropped out of high school after his sophomore year, and between 1928 and 31, along with his brother Russell, visited all the major Asian ports of call as a steamship hand for the American Mail Line. On arriving in Japan, he wrote:

In his early twenties, Graves finished high school in 1932 in Beaumont, Texas, while living with his maternal aunt and uncle. He then returned to Seattle, and received his first recognition as an artist when his painting Moor Swan (1933) won an award in the Seattle Art Museum's Northwest Annual Exhibition and was purchased by the museum. He split his time between Seattle and La Conner, Washington, where he shared a studio with Guy Anderson. Graves' early work was in oils and focused on birds touched with strangeness, either blind, or wounded, or immobilized in webs of light.

Graves began his lifelong study of Zen Buddhism in the early 1930s. In 1934, he built a small studio on family property in Edmonds, Washington. When it burned to the ground in 1935, almost all of his work to date was lost with it. His first one-man exhibition was in 1936 at the Seattle Art Museum (SAM); that same year he began working under Bruce Inverarity at the Seattle unit of the WPA's Federal Art Project. His participation was sporadic, but it was there that he met Mark Tobey and became impressed with Tobey's calligraphic line. In January 1937 Graves traveled to New York City to study with the controversial Father Divine's International Peace Mission movement in Harlem; on his return, in May, he bought 20 acres (81,000 m) on Fidalgo Island. In 1938 he quit the FAP and went to the Virgin Islands and Puerto Rico to paint.