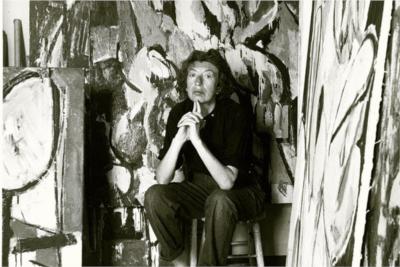 Krasner was born as Lena Krassner (outside the family she was known as Lenore Krasner) in Brooklyn, New York to Russian Jewish immigrant parents from Bessarabia.

She studied at The Cooper Union and the National Academy of Design, and worked on the WPA Federal Art Project from 1935 to 1943. Starting in 1937, she took classes with Hans Hofmann, who taught the principles of cubism, and his influence helped to direct Krasner's work toward neo-cubist abstraction. When commenting on her work, Hofmann stated, "This is so good you would not know it was painted by a woman."

In 1940, she started showing her works with the American Abstract Artists, a group of American painters.

Krasner would often cut apart her own drawings and paintings to create collages and, at times, revised or discarded an entire series. As a result, her surviving body of work is relatively small. Her catalogue raisonné, published in 1995 by Abrams, lists only 599 known pieces. She was rigorously self-critical, and her critical eye is believed to have been important to Pollock's work.

Krasner struggled with the public's reception of her identity, both as a woman and as the wife of Pollock. Therefore she often signed her works with the genderless initials "L.K." instead of her more recognizable full name.

Krasner and Pollock gave each other reassurance and support during a period when neither's work was well-appreciated. Like Picasso during the brief period of his interaction with Braque, the daily give-and-take of Pollock and Krasner stimulated both artists. Pollock and Krasner fought a battle for legitimacy, impulsiveness and individual expression. They opposed an old-fashioned, conformist, and repressed culture unreceptive to these values, which was put off by the intricacy of Modernism in general.

Lee Krasner died in 1984, age 75, from natural causes. She had been suffering from arthritis.

She is one of the few female artists to have had a retrospective show at the Museum of Modern Art.

Krasner was born as Lena Krassner (outside the family she was known as Lenore Krasner) on October 27, 1908 in Brooklyn, New York. Krasner was the daughter of Chane (née Weiss) and Joseph Krasner. Her parents were Russian-Jewish immigrants, from Shpykiv, a Jewish community in what is now Ukraine. Her parents fled to the United States to escape anti-Semitism and the Russo-Japanese War. Her mother Chane changed her name to Anna once she arrived in America. Lee was the fourth of five children, including her sister, Ruth, and the first who was born in America. She was the only one of her siblings to be born in the United States.

From an early age, Krasner knew she wanted to pursue art as a career. Krasner's career as an artist began when she was a teenager. She specifically sought out enrollment at Washington Irving High School for Girls since they offered an art major. After graduating from high school, she attended the Women's Art School of Cooper Union on a scholarship. Here, she completed the course work required for a teaching certificate in art. Krasner pursued yet more art education at the illustrious National Academy of Design, completing her course load there in 1932.

By 1928, she enrolled in the National Academy of Design. By attending a technical art school, Krasner was able to gain an extensive and thorough artistic education as illustrated through her knowledge of the techniques of the Old Masters. She also became highly skilled in portraying anatomically correct figures. There are relatively few works that survive from this time period apart from a few self-portraits and still lifes since most of the works were burned in a fire. One of the images that still exists from this time period is her "Self Portrait" painted in 1930. She submitted it to the National Academy in order to enroll in a certain class, but the judges could not believe that the young artist produced a self-portrait en plein air. In it, she depicts herself with a defiant expression surrounded by nature. She also briefly enrolled in the Art Students League of New York in 1928. Here, she took a class led by George Bridgman who emphasized the human form. Krasner was highly influenced by the opening of the Museum of Modern Art in 1929. She was very affected by post-impressionism and grew critical of the academic notions of style she had learned at the National Academy.

In the 1930s, she began studying modern art through learning the components of composition, technique, and theory. This initial investigation into modern art formed her work throughout the rest of her career. She began taking classes from Hans Hofmann in 1937, which modernized her approach to the nude and still life. He emphasized the two-dimensional nature of the picture plane and usage of color to create spatial illusion that was not representative of reality through his lessons. Throughout her classes with Hofmann, Krasner worked in an advanced style of cubism, also known as neo-cubism. During the class, a human nude or a still life setting would be the model from which Krasner and other students would have to work. She typically created charcoal drawings of the human models and oil on paper color studies of the still life settings. She typically illustrated female nudes in a cubist manner with tension achieved through the fragmentation of forms and the opposition of light and dark colors. The still lifes illustrated her interest in fauvism since she suspended brightly colored pigment on white backgrounds.