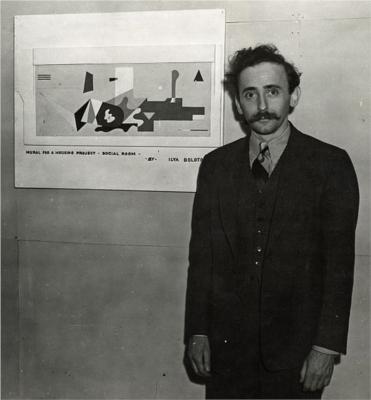 Ilya Bolotowsky (July 1, 1907 – November 22, 1981) was a leading early 20th-century painter in abstract styles in New York City. His work, a search for philosophical order through visual expression, embraced cubism and geometric abstraction and was much influenced by Dutch painter Piet Mondrian.

Born to Jewish parents in St. Petersburg, Russia, Bolotowsky moved to Baku and Constantinople, and immigrated to the United States in 1923, settling in New York City. He attended the National Academy of Design. He became associated with a group called "The Ten Whitney Dissenters," or simply "The Ten," artists, including Louis Schanker, Adolph Gottlieb, Mark Rothko, and Joseph Solman, who rebelled against the strictures of the Academy and held independent exhibitions.

Bolotowsky was mentored by Dutch painter Piet Mondrian and the tenets of De Stijl, a movement that advocated the possibility of ideal order in the visual arts. Bolotowsky adopted Mondrian's use of horizontal and vertical geometric pattern and a palette restricted to primary colors and neutrals.

Having turned to geometric abstractions, in 1936 Bolotowsky co-founded American Abstract Artists, a cooperative formed to promote the interests of abstract painters and to increase understanding between themselves and the public.

Bolotowsky's mural for the Williamsburg Housing Project in Brooklyn was one of the first abstract murals done under the Federal Art Project. Despite Bolotowsky's clear, precise control of his images, he emphasized the role of intuition over formula in determining his compositions.

In the 1960s, he began making three-dimensional forms, usually vertical and straight-sided. Bolotowsky's work was exhibited at the University of New Mexico in 1970.

Bolotowsky's first solo museum show was in 1974 at New York City's Guggenheim Museum and went on to the National Collection of Fine Arts.

His work has been exhibited at the Anita Shapolsky Gallery in New York City, and his son Andrew who handles Ilya's estate has visited the gallery's Art Foundation in Jim Thorpe, Pennsylvania, with groups a number of times.

A Bolotowsky painting bought at a North Carolina Goodwill store for $9.99 was auctioned at Sotheby's in September 2012 for $34,375.

Bolotowsky taught at Black Mountain College from 1946 to 1948. The artist Kenneth Noland was among his students. He taught humanities and fine arts at the Southampton, New York campus of Long Island University, the University of Wisconsin, Whitewater, and the University of New Mexico.