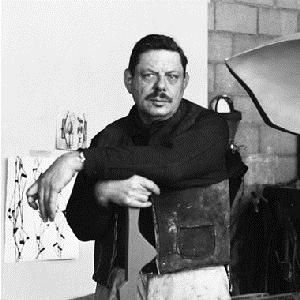 Roland David Smith was born on March 9, 1906 in Decatur, Indiana and moved to Paulding, Ohio in 1921, where he attended high school. From 1924-25, he attended Ohio University in Athens (one year) and the University of Notre Dame, which he left after two weeks because there were no art courses. In between, Smith took a summer job working on the assembly line of an automobile factory. He then briefly studied art and poetry at George Washington University in Washington, D.C.

Moving to New York in 1926, he met Dorothy Dehner (to whom he was married from 1927 to 1952) and, on her advice, joined her painting studies at the Art Students League of New York. Among his teachers were the American painter John Sloan and the Czech modernist painter Jan Matulka, who had studied with Hans Hofmann. Matulka introduced Smith to the work of Picasso, Mondrian, Kandinsky, and the Russian Constructivists. In 1929, Smith met John D. Graham, who later introduced him to the welded-steel sculpture of Pablo Picasso and Julio González.

Smith’s early friendship with painters such as Adolph Gottlieb and Milton Avery was reinforced during the Depression of the 1930s, when he participated in the Works Progress Administration's Federal Art Project in New York. Through the Russian émigré artist John Graham, Smith met avant-garde artists such as Stuart Davis, Arshile Gorky and Willem de Kooning. He also discovered the welded sculptures of Julio González and Picasso, which led to an increasing interest in combining painting and construction.

In the Virgin Islands in 1931–32, Smith made his first sculpture from pieces of coral. In 1932, he installed a forge and anvil in his studio at the farm in Bolton Landing that he and Dehner had bought a few years earlier. Smith started by making three-dimensional objects from wood, wire, coral, soldered metal and other found materials but soon graduated to using an oxyacetylene torch to weld metal heads, which are probably the first welded metal sculptures ever made in the United States. A single work may consist of several materials, differentiated by varied patinas and polychromy.

In 1940, the Smiths distanced themselves from the New York art scene and moved permanently to Bolton Landing, NY near Lake George. At Bolton Landing, he ran his studio like a factory, stocked with large amounts of raw material. The artist would put his sculptures in what is referred to as an upper and lower field, and sometimes he would put them in rows, "as if they were farm crops".

After the war, with the additional skills that he had acquired, Smith released his pent-up energy and ideas in a burst of creation between 1945 and 1946. His output soared and he went about perfecting his own, very personal symbolism.