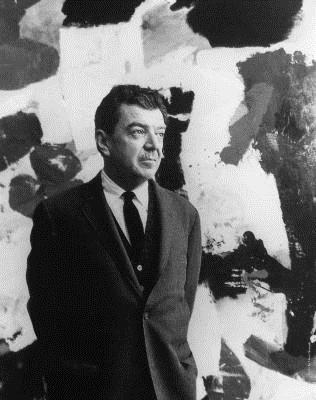 Brooks was born in St. Louis, Missouri and attended Southern Methodist University and the Dallas Art Institute and moved to New York in 1927 where he attended night classes at the Art Students League. In 1936 he joined the Federal Art Project where he would paint a 235-foot mural entitled "Flight" around the rotunda of the Marine Air Terminal at La Guardia Airport. The mural was painted over by the Port Authority in the 1950s but was restored in 1980.

Brooks was a friend of Jackson Pollock and Lee Krasner and would move into Pollock's Greenwich Village apartment at 46 East 8th Street after Pollock and Krasner moved to Springs, New York in East Hampton, New York.

In 1947 he married artist Charlotte Park. They also moved to East Hampton in 1949 creating a studio at Rocky Point in Montauk, New York. The Montauk studio and several of Brooks paintings were destroyed in Hurricane Carol with the studio being blown off a hill in 1954. Brooks then had their house which was not damaged towed by barge across to Springs where it was located on an 11-acre parcel on Neck Path close to Pollock's home. Brooks and Park had no children and their property after the house and studios were left vacant was sold to East Hampton in 2013 with the town planning to tear it down. The town reconsidered their decision in February 2017 to tear down following a local campaign to restore the compound and instead announced plans to restore the studio and house. Town officials noted Brooks paint cans were still in the studio.

Considered a first generation abstract expressionist painter, Brooks was among the first abstract expressionists to use staining as an important technique. According to art critic Carter Ratcliff, "His concern has always been to create painterly accidents of the kind that allow buried personal meanings to take on visibility." In his paintings from the late 1940s Brooks began to dilute his oil paint in order to stain the mostly raw canvas. These works often combined calligraphy and abstract shapes.

Brooks had his first one-man exhibition of his abstract expressionist paintings in 1949 at the Peridot Gallery in New York. His work was displayed in the 9th Street Art Exhibition in 1951.

His work has been displayed at the Courtauld Institute of Art (London), the Dallas Museum of Art (Dallas, Texas), the Museum of Modern Art (New York, NY), the Harvard University Art Museums, the Whitney Museum of American Art (New York, NY), the Honolulu Museum of Art, the Indianapolis Museum of Art (Indianapolis, Indiana), the Sheldon Art Gallery (Lincoln, Nebraska), the Smithsonian American Art Museum (Washington D.C.), the Tate Gallery (London) and the Walker Art Center (Minneapolis, Minnesota) are among the public collections holding work by James Brooks. His works were also exhibited by galleries including the Anita Shapolsky Gallery in New York City, the Peridot Gallery in New York, and Washburn Gallery in New York.