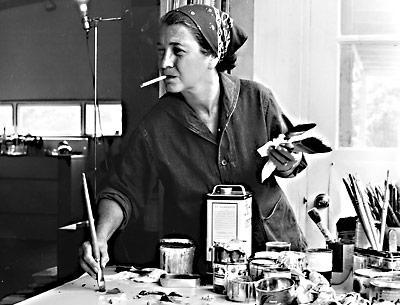 Perle Fine was among the most prominent female artists associated with American Abstract Expressionism.

Perle Fine was born in Boston, MA, in 1905. Her interest in art started at early age. In her early twenties she moved to New York City to study at the Art Students League with Kimon Nicolades. In the late 1930s she began to study with Hans Hofmann in New York City as well as in Provincetown, MA. In 1950 she was nominated by Willem de Kooning and then admitted to the 8th Street “Artists’ Club”, located at 39 East 8th Street.

Perle Fine was chosen by her fellow artists to show in the Ninth Street Show held on May 21 – June 10, 1951.[5] The show was located at 60 East 9th Street on the first floor and the basement of a building which was about to be demolished. According to Bruce Altshuler: "The artists celebrated not only the appearance of the dealers, collectors and museum people on the 9th Street, and the consequent exposure of their work but they celebrated the creation and the strength of a living community of significant dimensions."

Perle Fine participated from 1951 to 1957 in the invitational New York Painting and Sculpture Annuals, including the Ninth Street Show., She was among the 24 out of a total 256 New York School artists who was included in all the Annuals. These Annuals were important because the participants were chosen by the artists themselves.

In the 1950s Fine moved to the Springs, section of East Hampton on the eastern end of Long Island where Jackson Pollock, Lee Krasner. Willem de Kooning, Conrad Marca-Relli and other members of the New York School found permanent residence.

Perle Fine stated the following: " I never thought of myself as a student or teacher, but as a painter. When I paint something I am very much aware of the future. If I feel something will not stand up 40 years from now, I am not interested in doing that kind of thing."

Perle Fine (Poule Feine) (1905–1988) was an American Abstract Expressionist painter. Fine was most known by her combination of fluid and brushy rendering of the materials and her use of biomorphic forms encased and intertwined with irregular geometric shapes.

“…[T]he very image of the Abstract Expressionist painter was a white, heterosexual male, and that this movement, which perceived itself as a glyph of individual freedom, constricted the entry of women, African Americans, and homosexuals, regardless of the nature and quality of their work.” While Women have had a history of being left out of the arts, it was Samuel Kootz’s, a New York Gallery owner that helped determine what art was mainstream, pronouncement that there would be no women artists in his gallery. To this which Fine promptly said, “I know I was as good as anybody else in there,” However, Perle Fine was not the only female artist that was affected by this statement, artists such as Fannie Hillsmith and Lee Krasner were also deeply affected.

Despite Kootz’s statement, Fine had been in many solo and group shows during the late 1940s. Because of her success with these exhibitions, there was every implication that Fine was on the verge of success in the art world. “As the 1950’s dawned… there was little competition among artists either male or female, it was only when the door began to crack open that the gender of the artist began to play a more prominent role.” Deirdre Robson has said that “The arts were gradually thought of less in terms of being part of the ‘female’ realm and more as an interest suitable for a hardheaded and successful businessman.”

Perle Fine was born in Boston, MA, in 1905. Shortly after her parents immigrated to the United States from Russia. Her interest in art started at early age. “Starting almost immediately in grammar school at the time of the First World War … I did posters and started winning little prizes and getting encouragement that way So that by the time I graduated from high school I knew very well I wanted to be an artist.” Fine briefly went to School of Practical Art in Boston, where she learned to design newspaper advertisements, before going the New York City To briefly attend Grand Central School of Art. It was at the Grand Central School of Art where Fine met Maurice Berezov whom she married in 1930. While in New York, she also studied at the Art Students League with Kimon Nicolades. In the late 1930s she began to study with Hans Hofmann in New York City as well as in Provincetown, MA. Fine joined the American Abstract Artists in the early 1940s where she found a lot of support for her artistic ideas. “By the mid 1940’s, Fine had work in the collections of Frank Lloyd Wright and Frank Crowninshield… her art was also owned by Alfred Barr, director of the Museum of Modern Art, and Emily Hall and Burton Tremaine, the modern art collectors from Connecticut.“Perhaps one of the most and distinguishing moments in her career was a commission by Emily Tremaine to make two interpretations of [Piet] Mondrian’s Victory Boogie Woogie, a painting left unfinished at his death in 1944.”