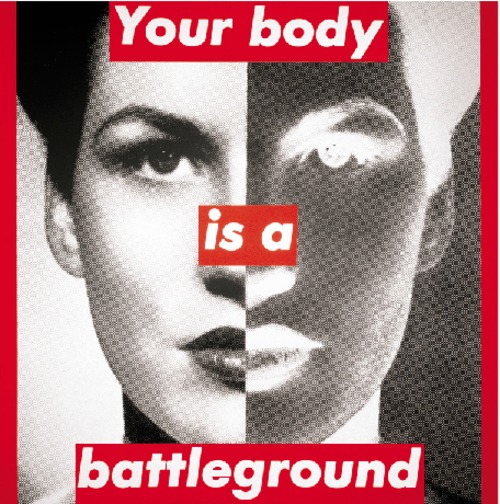 Untitled (Your body is a battleground), 1989 - Barbara Kruger

Feminist art, a category of art associated firstly with feminists of the late 1960s and 1970s and feminism generally, criticized the traditional gender expectations and the art-history canon, using art to create a dialogue between the viewer and the artwork through a feminist lens. Rather than creating artwork for the visual pleasure of the viewer, feminist art aimed to make the viewer question the social and political norms of society in the hopes that it would inspire change towards what feminism is all about -ending sexism/oppression. The media use ranged from traditional art forms - such as painting - to non-traditional methods such as performance art, conceptual art, body art, craftivism, video, film, as well as fiber art. Feminist art served as an innovative driving force towards expanding the definition of art through the incorporation of new media and a new perspective.

Historically, there likely is female artist that were comparable to Michelangelo or Leonardo Da Vinci primarily because women were excluded from training as artists- especially when it came to studying the human body and thus having to see a nude model. Towards the end of the 1960s, the feminist art movement emerged during a time where the idea that women were fundamentally inferior to men was criticized- especially in the art world. In "Why Have There Been No Great Women Artists" Linda Nochlin wrote, “The fault lies not in our stars, our hormones, our menstrual cycles, or our empty internal spaces, but in our institutions and our education”. Through various media, women artists brought to light a patriarchal history in which the majority of the most famous works of art were made by men and made for men. After the 1960s, we begin to see the birth of new media and the gradual decline of gender discrimination in art.

According to the dictionary definition, the word feminist was coined around 1852, and meant “feminine qualities. ” Shortly thereafter it came to mean the modern/contemporary intonations held in “feminist art.” There are several research articles alluding to specific writers/artists around this time:

There is a feminist art movement that began in the 1970s, but this is a less broad category than the term “feminist art,” and so the origins of feminist art can be re-defined both in the sense of language, and by acknowledgement beginning— at the least— around the late 1800s.

Lucy R. Lippard stated in 1980 that feminist art was "neither a style nor a movement but instead a value system, a revolutionary strategy, a way of life."