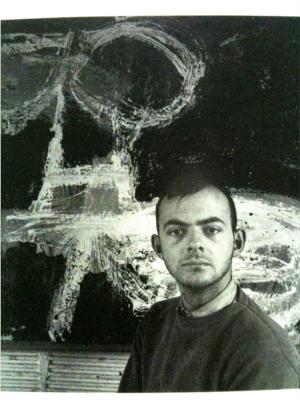 Cy Twombly, together with Robert Rauschenberg and Jasper Johns was one of the prominent artists of his generation. Out of the three, Twombly is probably the lesser known and most enigmatic character. This is partly due to the fact that Twombly seemed to be out of step with the dominant trends of the time. His art was always contemporary and reflective of his time, however his unique style always set him apart from the prevailing trends. Even though many of Twombly’s artworks are linked to styles and movements, such as Abstract Expressionism, Neo-Dada, Minimalism, Conceptual Art and Neo-Expressionism, none of these categories fully describes the diversity and richness of his body of work.

Twombly showed an interest in painting from an early age. After receiving a scholarship in 1950, he moved to New York to pursue his studies and painting career. There, he became acquainted with Rauschenberg and Johns, and through the early 1950s he began to develop his artistic style. For Twombly, the past was the source of energy that inspired the creation of contemporary art. It began with an interest in ‘primitive art’, archeology and ancient artifacts, and deepened when he travelled to Europe and North Africa with Rauschenberg in 1952. He was particularly taken by Italy, and in 1957 he moved to Rome. In Rome, the artist gained the freedom that allowed him to break away from the influence of New York art circles. Following his move to Italy, the artist introduced color to his work, and created canvases inspired by Roman and Italian culture, in particular by mythology, historical events and famous masterpieces. He was inspired by Rome as an intersection of ancient classical culture, Renaissance and Baroque heritage, and contemporary urban life. Twombly was able to harness this energy by mixing influences of mythology, history and graffiti on local ancient walls. At the same time, his paintings were original interpretations of culture and history that expressed his individuality and contemporary artistic sensibility.

From the mid-1960s, Twombly began to paint series of gray-ground paintings, such as Cold Stream (1966), Untitled (1967), and Untitled (1970), which were stylistically minimalist and focused on the gesture of painting. These paintings, often called ‘blackboard paintings’ had repeating rows of white circular lines. The line is reminiscent of handwriting, and evokes the idea of writing in an abstract manner. This was reflective of another important feature in Twombly’s art, who throughout his career used writing and text in his art. He was interested in graffiti, and often incorporated words, text and poetry into his paintings. This is evident for example in the series Fifty Days at Iliam (1978), which pays homage to Homer’s Iliad, the story of the last fifty days of the Trojan War.

In the later decades of his career, Twombly’s use of color became increasingly bold. The artist continued to deal with historic themes, such as Coronation of Sesostris (2000), dedicated to the Ancient Egyptian King, and Lepanto (2001), a cycle of paintings referencing the Lepanto Battle of 1571. Another source of inspiration was nature, as is evident in the flower series of the 2000s: the Peony Blossom Paintings (2007) and The Roses (2008).

Edwin Parker "Cy" Twombly Jr. (/saɪ ˈtwɒmbli/; April 25, 1928 – July 5, 2011) was an American painter, sculptor and photographer. He belonged to the generation of Robert Rauschenberg and Jasper Johns but chose to live in Italy after 1957.

His paintings are predominantly large-scale, freely-scribbled, calligraphic and graffiti-like works on solid fields of mostly gray, tan, or off-white colors. Many of his works are in the permanent collections of most of the museums of modern art around the world, including the Menil Collection in Houston, the Tate Modern in London and the New York's Museum of Modern Art. He was also commissioned for the ceiling of a room of the Musée du Louvre in Paris.

Many of his later paintings and works on paper shifted toward "romantic symbolism", and their titles can be interpreted visually through shapes and forms and words. Twombly often quoted the poets as Stéphane Mallarmé, Rainer Maria Rilke and John Keats, as well as many classical myths and allegories in his works. Examples of this are his Apollo and The Artist and a series of eight drawings consisting solely of inscriptions of the word "VIRGIL". In a 1994 retrospective, curator Kirk Varnedoe described Twombly's work as "influential among artists, discomfiting to many critics and truculently difficult not just for a broad public, but for sophisticated initiates of postwar art as well." After acquiring Twombly's Three Studies from the Temeraire (1998–99), the Director of the Art Gallery of New South Wales said, "Sometimes people need a little bit of help in recognising a great work of art that might be a bit unfamiliar." Twombly is said to have influenced younger artists such as Jean-Michel Basquiat, Anselm Kiefer, Francesco Clemente, and Julian Schnabel.

Twombly was born in Lexington, Virginia, on April 25, 1928. Twombly's father, also nicknamed "Cy", pitched for the Chicago White Sox. They were both nicknamed after the baseball great Cy Young who pitched for, among others, the Cardinals, Red Sox, Indians, and Braves.

At age 12, Twombly began to take private art lessons with the Catalan modern master Pierre Daura. After graduating from Lexington High School in 1946, Twombly attended Darlington School in Rome, Georgia, and studied at the School of the Museum of Fine Arts, Boston (1948–49), and at Washington and Lee University (1949–50) in Lexington, Virginia. On a tuition scholarship from 1950 to 1951, he studied at the Art Students League of New York, where he met Robert Rauschenberg with whom he had a relationship. Rauschenberg encouraged him to attend Black Mountain College near Asheville, North Carolina. At Black Mountain in 1951 and 1952 he studied with Franz Kline, Robert Motherwell and Ben Shahn, and met John Cage. The poet and rector of the College Charles Olson had a great influence on him.

Arranged by Motherwell, Twombly's first solo exhibition was organized by the Samuel M. Kootz Gallery in New York in 1951. At this time his work was influenced by Kline's black-and-white gestural expressionism, as well as Paul Klee's imagery. In 1952, Twombly received a grant from the Virginia Museum of Fine Arts which enabled him to travel to North Africa, Spain, Italy, and France. He spent this journey in Africa and Europe with Robert Rauschenberg. In 1954, he served in the U.S. Army as a cryptographer in Washington, D.C. and would frequently travel to New York during periods of leave. From 1955 through 1956, he taught at the Southern Seminary and Junior College in Buena Vista, Virginia, currently known as Southern Virginia University; during the summer vacations, Twombly would travel to New York to paint in his Williams Street apartment.