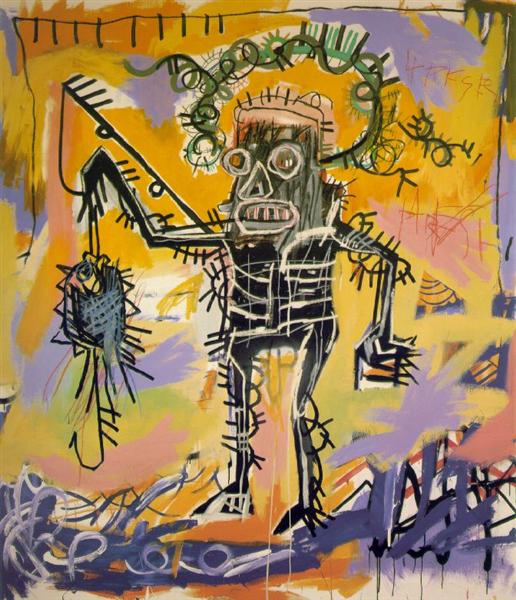 Neo-expressionism is a style of late-modernist or early-postmodern painting and sculpture that emerged in the late 1970s. Neo-expressionists were sometimes called Neue Wilden ('The new wild ones'; 'New Fauves' would better meet the meaning of the term). It is characterized by intense subjectivity and rough handling of materials.

Neo-expressionism developed as a reaction against conceptual art and minimal art of the 1970s. Neo-expressionists returned to portraying recognizable objects, such as the human body, (although sometimes in an abstract manner), in a rough and violently emotional way, often using vivid colors. It was overtly inspired by German Expressionist painters, such as Emil Nolde, Max Beckmann, George Grosz, Ernst Ludwig Kirchner, James Ensor and Edvard Munch. It is also related to American Lyrical Abstraction painting of the 1960s and 1970s, The Hairy Who movement in Chicago, the Bay Area Figurative School of the 1950s and 1960s, the continuation of Abstract Expressionism, New Image Painting and precedents in Pop Painting.

Neo-expressionism dominated the art market until the mid-1980s. The style emerged internationally and was viewed by many critics, such as Achille Bonito Oliva and Donald Kuspit, as a revival of traditional themes of self-expression in European art after decades of American dominance. The social and economic value of the movement was hotly debated.

Critics such as Benjamin Buchloh, Hal Foster, Craig Owens, and Mira Schor were highly critical of its relation to the marketability of painting on the rapidly expanding art market, celebrity, the backlash against feminism, anti-intellectualism, and a return to mythic subjects and individualist methods they deemed outmoded. Women were notoriously marginalized in the movement, and painters such as Elizabeth Murray and Maria Lassnig were omitted from many of its key exhibitions, most notoriously the 1981 "New Spirit in Painting" exhibition in London which included 38 male painters but no female painters.