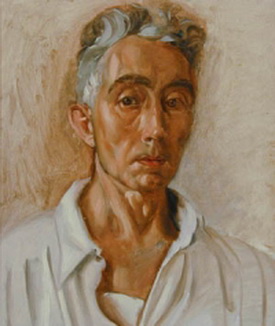 He was born on Menorca, Balearic Islands, Spain, a few days before his parents returned to their home in Barcelona and registered his birth there as February 21, 1896. In Paris, in 1914, his French identity papers were issued with Pierre as his given name, and that is how he is usually known; however, he is known as Pere where Catalan is spoken.

Daura's father, Joan Daura Sendra (or in Spanish: Juan Daura y Sendra), was a musician in the Barcelona Liceu Orchestra and a textile merchant. His godfather was the famed cellist Pablo Casals. His mother, Rosa de Lima Garcia y Martínez, died when he was seven. He and two younger siblings, Ricardo and Mercedes, were raised by their father, who never remarried.

Daura received his art education at the Academy of Fine Arts in Barcelona, known as "La Llotja". His teachers included José Ruiz y Blasco (Pablo Picasso's father) and Josep Calvo. Whilst at La Llotja he also worked with the stage designer Joaquim Jiménez i Solà. At age fourteen, with his young friends Emili Bosch i Roger and Agapit Vidal Salichs, he set up a studio and sold his first painting at his inaugural exhibition to the Catalan artist and collector Eduard Pascual Monturiol, who said it reminded him of Paul Cézanne's work. In 1914, Calvo urged Daura to go to Paris to pursue his art career. He arrived there in the early summer that year and first worked in the studio of Émile Bernard, with whom he was friends for many years. Later, he studied engraving under André Lambert.

From 1917 to 1920, Daura served his three years of compulsory Spanish military service on Menorca and then returned to Paris In 1923, whilst painting a mural in Normandy, the scaffolding collapsed. He was badly injured and his left hand became permanently useless because of nerve damage. From 1925 to 1927, Daura and Gustavo Cochet, an Argentine artist, designed and made batik material for couturiers, until fire destroyed their studio and business.

In the 1920s, Daura frequently exhibited with the group Agrupacio d'Artistes Catalans, usually in Barcelona. In 1922 and 1926 he exhibited at the Salon d'Automne in Paris, but in 1928 he joined four others rejected by the Salon, Joaquín Torres García, Jean Hélion, Ernest Engel-Rozier, and Alfred Aberdam, and held a critically acclaimed exhibition at Gallery Marck: Cinq Peintres Refusés par le Jury du Salon. Daura had met Torres-Garcia in 1925, encouraged him to move to Paris, and arranged for Torres-Garcia's first show there, at Gallery A.G. Fabre in 1926.

In 1927, Daura met Louise Heron Blair of Richmond, Virginia, who was studying art in Paris, and they married in 1928. Several years later, Louise's sister married Hélion.

In 1929–30, Daura joined Michel Seuphor and Torres-Garcia in organizing the group Cercle et Carré (Circle and Square), which promoted geometric construction and abstraction in opposition to Surrealism. Cercle et Carré included Jean Arp, Wassily Kandinsky, Fernand Léger, Piet Mondrian, Antoine Pevsner, Kurt Schwitters, Joseph Stella, Georges Vantongerloo, and others. Daura designed the group's logo, which appeared on stationary, posters, and the three issues of a review; Torres-Garcia also used it later for his Círculo y Cuadrado (a name that also translates as Circle and Square) group in Uruguay. The only Cercle et Carré exhibition was held at Gallery 23, in Paris in April 1930. Virtually ignored by the French press at the time, Cercle et Carré is now considered of great importance in the history of modern art.