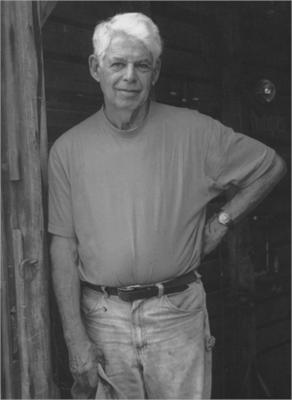 Kahn, known for his combination of Realism and Color Field, works in pastel and oil paint. He studied under Hans Hofmann, and also graduated from the University of Chicago. Kahn is a resident of both New York City and, during the summer and autumn, West Brattleboro, Vermont.

Wolf Kahn was born in Stuttgart, Germany, in 1927. He was the fourth child of Emil and Nellie Budge Kahn. Kahn's father was a notable figure in the music world. He was musician, composer, conductor, and teacher. In 1933, Kahn's father lost his appointment with the Stuttgart Philharmonic Orchestra when Hitler came to power and, with increasing antisemitism sweeping Germany, he and his second wife left Germany with Kahn's three siblings for the United States. Wolf was sent to live with his grandmother, Anna Kahn, in Frankfurt, Germany, at the age of three. He states that he began drawing at the age of four. In 1937, the summer of his 11th birthday, his grandmother signed him up for private art lessons with Miss von Joeden. He drew every day and was inspired by military pageantry, Napoleonic Wars and prominent historical figures including Adolph Menzel and Frederick the Great. In 1939, when Kahn was 12 years old, his grandmother arranged for him to leave Germany for England to live with a host family, first with the John Wade family and then with the Purvis Family. As quotas for immigrant applications in the United States changed, Kahn was able to reunite with his family in New York City in 1940 at the age of 13.

In 1942, Kahn was accepted for his sophomore year at the High School of Music and Art in New York City. His drawings morphed into caricatures. Kahn cites David Low and Thomas Nast as favorite cartoonists. His first job was graphics editor of the school newspaper, The Overtone. He graduated in 1945. After a year in the Navy after high school, Kahn first attended the New School to study painting under Stuart Davis. With the aid of the GI Bill, he was able to continue his studies with Abstract Expressionist Hans Hofmann at the Hans Hofmann School. He became Hofmann’s studio assistant by the summer of 1947 at Hofmann's Provincetown, Massachusetts studio. In 1949, Kahn was accepted into the University of Chicago's Hutchins Program, where he completed a bachelor's degree in eight months.

Kahn works in oil and pastel. His works usually covers the subject of landscapes and his own personal vision of nature. His convergence of light and color has been described as combining "pictorial landscapes and painterly abstraction".

Surrounded from birth by the work of such artists as Hans Thoma, Carl Spitzweg, Wilhelm Trubner, Franz Winterhalter, by Edwardian furniture, books and bronzes of Schiller and Goethe, it is no wonder that Kahn started drawing at a very young age. While at the University of Chicago, he became interested in philosophy, particularly the writings of Immanuel Kant while making sketches of sailboats riding anchor on Lake Michigan.