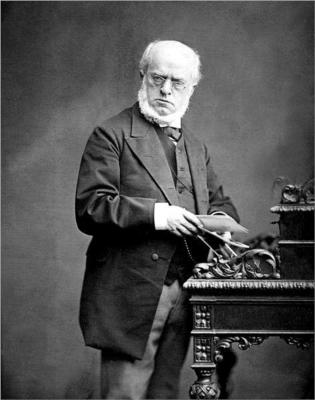 Adolph Friedrich Erdmann von Menzel (December 8, 1815 – February 9, 1905) was a German Realist artist noted for drawings, etchings, and paintings. Along with Caspar David Friedrich, he is considered one of the two most prominent German artists of the 19th century, and was the most successful artist of his era in Germany. First known as Adolph Menzel, he was knighted in 1898 and changed his name to Adolph von Menzel.

His popularity in his native country, owing especially to history painting, was such that few of his major paintings left Germany, as many were quickly acquired by museums in Berlin. Menzel's graphic works and drawings were more widely disseminated; these, along with informal paintings not initially intended for display, have largely accounted for his posthumous reputation.

Although he traveled in order to find subjects for his art, to visit exhibitions, and to meet with other artists, Menzel spent most of his life in Berlin, and was, despite numerous friendships, by his own admission detached from others. It is likely that he felt socially estranged for physical reasons alone—Menzel had a large head, and stood about four foot six inches.

Menzel was born in Breslau, Silesia, on December 8, 1815. His father was a lithographer and intended to educate his son as a professor; however, he would not thwart his taste for art. After resigning his teaching post, Menzel senior set up a lithographic workshop in 1818. In 1830 the family moved to Berlin, and in 1832 Adolph was forced to take over the lithographic business on the death of his father. In 1833, he studied briefly at the Berlin Academy of Art, where he drew from plaster casts and ancient sculptures; thereafter Menzel was self-taught. Louis Friedrich Sachse (de) of Berlin published his first work in 1833, an album of pen-and-ink drawings reproduced on stone, to illustrate Goethe's little poem, Kunstlers Erdenwallen. He executed lithographs in the same manner to illustrate Denkwürdigkeiten aus der brandenburgisch-preussischen Geschichte; The Five Senses and The Prayer, as well as diplomas for various corporations and societies.

From 1839 to 1842, he produced 400 drawings, largely introducing to Germany the technique of wood engraving, to illustrate the Geschichte Friedrichs des Grossen (History of Frederick the Great) by Franz Kugler. He subsequently brought out Friedrichs der Grossen Armee in ihrer Uniformirung (The Uniforms of the Army under Frederick the Great), Soldaten Friedrichs der Grossen (The Soldiers of Frederick the Great); and finally, by order of King Frederick William IV, he illustrated the works of Frederick the Great, Illustrationen zu den Werken Friedrichs des Grossen (1843–1849). The artist had a deep sympathy for the Prussian king. In one of his letters to Johann Jakob Weber, he said that it was his intention to represent the monarch as a man who was both hated and admired—simply as he was, in other words, as a man of the people. Through these works, Menzel established his claim to be considered one of the first, if not actually the first, of the illustrators of his day in his own line.