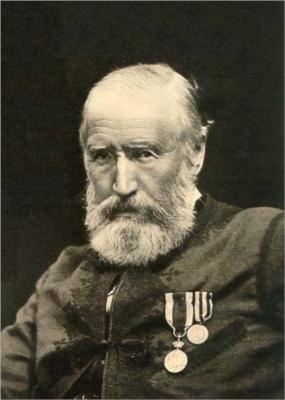 Born into poverty in Glasgow, Simpson went on to become one of the leading 'special artists' of his day, and sketched many scenes of war for the Illustrated London News. His early years were very difficult living in a house with an abusive and alcoholic father, and in 1834 he was sent to live with his grandmother in Perth. Simpson's only formal schooling took place during this period and within a few years, he was working as an apprentice in the Glasgow lithographic firm of Macfarlane. The artist stated later that "this was the turning point which changed all my boyish intentions." It was during the years in Glasgow that he attended the Andersonian University and the Mechanics Institute in the evenings.

His next position was to create an image of the Alma based on various accounts so that it could be lithographed by another London publisher, Lloyd's. He also put sketches sent from the Baltic onto stone for the firm of Colnaghi. In anticipation of the fall of Sebastopol, Lloyd's had him prepare an image of the fall of the town so that it could be published immediately upon news of its actual capture. This presented a challenge to Simpson as he had little information about Sebastopol. He occasionally spoke with Mr. Day of Day and Son about the need to have sketches drawn at the front. Shortly thereafter, Colnaghi's contacted Simpson and invited him to go out to the Crimea and make sketches for the company.

Simpson arrived off the Crimean peninsula on 15 November 1854 and could hear distant firing. While he had missed the early battles, he was able to record the events before Sebastopol. He made numerous acquaintances who helped him with details for his pictures, but he was also struck by the plight of the common soldiers, "miserable looking beings...covered with mud, dirt, and rags," he wrote. He hobnobbed with many officers including Lord Raglan and Captain Peel; he also met Roger Fenton who took his photograph. In May 1855, Simpson accompanied Raglan on the expedition to Kertch which was captured on the 24th, but was back in time to observe the first attack on Sebastopol in June. On the night of the 17th, he crawled out of a trench to view the attack. He wrote, "It was a wild orchestra of sound, never to be forgotten." He was still at the front when the city finally surrendered, and he quit the Crimea in the autumn of 1855.

Throughout his time at the front, he would send back his water-colors to London where the lithographers of Day & Son would transfer them to stone. Simpson was paid 20 pounds for each picture. For the color, a separate stone was used for each tone. Colnaghis exhibited some of the water-colors including a show at the Graphic Society in February 1855. The first advertisements for the lithographs appeared in May 1855 and in the following month, a second series was announced.