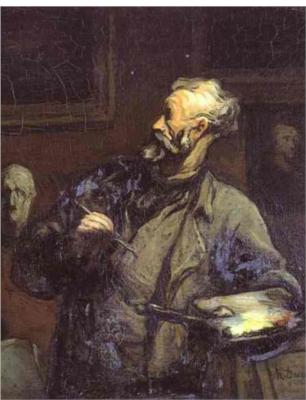 Known as the “Michelango of Caricature,” Honore Daumier was a prolific painter, printmaker, sculptor, and caricaturist. He produced over 4000 lithographs in his lifetime, which were known for their satires of political figures and the behavior of the bourgeois inn society. As a boy he showed an inclination towards art, which his father tried to discourage, and so he put him to work as an usher. But, Daumier’s talents could not be dissuades, and he later work at a booksellers, eventually landing in the employ of Alexandre Lenoir, an artist and archaeologist, and becoming his protégé. It was here that he began making his first attempts at lithography, and began a career producing plates for music producers and advertisement illustrations.

He began working for the comic journal La Caricature during the reign of King Louis Phillippe, and produced many caricatures outlining corruption on the law, the mistakes of the bourgeois, and the incompetence of the government. It was at this time that he published a satire of the king as Gargantua, which landed him in prison for six months, after which the journal La Caricature ceased publication. He also produced caricatures for the publication Le Chavivari, holding the bourgeois up to more scrutiny

One of his favorite themes was Don Quixote, of which he drew 49 drawings, and completed 29 paintings depicting his life. Daumier received little recognition until 1878, a year before his death, when his works were put on exhibition. Posthumously, more recognition has been placed on Daumier and his revered social commentary.

Honoré-Victorin Daumier (French: [ɔnɔʁe domje]; February 26, 1808 – February 10, 1879) was a French printmaker, caricaturist, painter, and sculptor, whose many works offer commentary on social and political life in France in the 19th century.

Daumier produced over 500 paintings, 4000 lithographs, 1000 wood engravings, 1000 drawings and 100 sculptures. A prolific draughtsman, he was perhaps best known for his caricatures of political figures and satires on the behavior of his countrymen, although posthumously the value of his painting has also been recognized.

Daumier was born in Marseille to Jean-Baptiste Louis Daumier and Cécile Catherine Philippe. His father Jean-Baptiste was a glazier whose literary aspirations led him to move to Paris in 1814, seeking to be published as a poet. In 1816 the young Daumier and his mother followed Jean-Baptiste to Paris. Daumier showed in his youth an irresistible inclination towards the artistic profession, which his father vainly tried to check by placing him first with a huissier, for whom he was employed as an errand boy, and later, with a bookseller. In 1822 he became protégé to Alexandre Lenoir, a friend of Daumier's father who was an artist and archaeologist. The following year Daumier entered the Académie Suisse. He also worked for a lithographer and publisher named Belliard, and made his first attempts at lithography.

Having mastered the techniques of lithography, Daumier began his artistic career by producing plates for music publishers, and illustrations for advertisements. This was followed by anonymous work for publishers, in which he emulated the style of Charlet and displayed considerable enthusiasm for the Napoleonic legend. After the revolution of 1830 he created art which expressed his political beliefs. Daumier was almost blind by 1873.

During the reign of Louis Philippe, Charles Philipon launched the comic journal, La Caricature, Daumier joined its staff, which included such powerful artists as Devéria, Raffet and Grandville, and started upon his pictorial campaign of satire, targeting the foibles of the bourgeoisie, the corruption of the law and the incompetence of a blundering government. His caricature of the king as Gargantua led to Daumier's imprisonment for six months at Ste Pelagie in 1832. Soon after, the publication of La Caricature was discontinued, but Philipon provided a new field for Daumier's activity when he founded the Le Charivari.

Daumier produced his social caricatures for Le Charivari, in which he held bourgeois society up to ridicule in the figure of Robert Macaire, hero of a popular melodrama. In another series, L'histoire ancienne, he took aim at the constraining pseudo-classicism of the art of the period. In 1848 Daumier embarked again on his political campaign, still in the service of Le Charivari, which he left in 1863 and rejoined in 1864.

Around the mid-1840s Daumier started publishing his famous caricatures depicting members of the legal profession, known as 'Les Gens de Justice', a scathing satire about judges, defendants, attorneys and corrupt, greedy lawyers in general. A number of extremely rare albums appeared on white paper, covering 39 different legal themes, of which 37 had previously been published in the Charivari. It is said that Daumier's own experience as an employee in a bailiff's office during his youth may have influenced his rather negative attitude towards the legal profession.