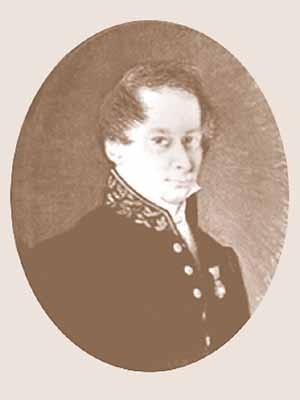 Vasily Semenovich Sadovnikov was born in 1800 in Saint Petersburg into the family of a serf belonging to Princess N. P. Golitsina (nicknamed "Princesse Moustache"). He obtained his freedom in 1838, after her death, when he was already a well-known artist.

Vasily's brother, Pyotr Sadovnikov, was Srtoganovs' and Golitsins' family architect. He started his professional training with Andrey Voronikhin, subsequently became a Member of Saint Petersburg Academy of Arts (1849). Vasily Sadovnikov also learned his craft in Voronikhin's studios, where he came in contact with the painters Maxim Vorobiev and Alexey Venetsianov, who not only helped the gifted youth professionally but also took an active part in his liberation. Sadovnikov mainly painted "views" (vedute), but these views are always inhabited with vivid scenes, which characterize the artist not only as a landscapist but also as a genre master.

His views of St. Petersburg and its suburbs from 1830 to 1850 and interiors of its palaces, commissioned by the royal court and other high patrons, are best known. Sadovnikov's Panorama of Nevsky Prospect (1830–1850), which was 16 meters long, was later etched and widely published.

He died in 1879 in Saint Petersburg and was buried at Mitrofanyevskoe Cemetery (now abolished).