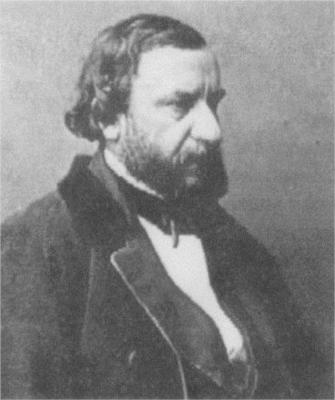 Constant Troyon (August 28, 1810 – February 21, 1865) was a French painter of the Barbizon school. In the early part of his career he painted mostly landscapes. It was only comparatively late in life that Troyon found his métier as a painter of animals, and achieved international recognition.

He was born in Sèvres, near Paris, where his father was connected with the famous manufactory of porcelain. Troyon entered the ateliers very young as a decorator, and until he was twenty he labored assiduously at the minute details of porcelain ornamentation; and this kind of work he mastered so thoroughly that it was many years before he overcame its limitations. By the time he reached twenty-one he was travelling the country as an artist, and painting landscapes so long as his finances lasted. Then when pressed for money he made friends with the first china manufacturer he met and worked steadily at his old business of decorator until he had accumulated enough funds to permit him to start again on his wanderings.

Troyon was a favorite with Camille Roqueplan, an artist of distinction eight years his senior, and he became one of his pupils after receiving certain tuition from a painter, now quite unknown, named Alfred Riocreux. Roqueplan introduced Troyon to Rousseau, Jules Dupré, and the other Barbizon painters, and in his pictures between 1840 and 1847 he seemed to endeavour to follow in their footsteps. But as a landscapist Troyon would never have been recognized as a thorough master, although his work of the period is marked with much sincerity and met with a certain success. It may be pointed out, however, that in one or two pure landscapes of the end of his life he achieved qualities of the highest artistic kind; but this was after lengthy experience as a cattle painter, by which his talents had become thoroughly developed.

In 1846 Troyon went to the Netherlands, and at the Hague saw Paulus Potter's famous "Young Bull". From the studies he made of this picture, of Cuyp's sunny landscapes, and Rembrandt's noble masterpieces he soon evolved a new method of painting, and it is only in works produced after this time that Troyon's true individuality is revealed. When he became conscious of his power as an animal painter he developed with rapidity and success, until his works became recognized as masterpieces in Britain and America, as well as in all countries of the Continent.

Success, however, came too late, for Troyon never quite believed in it himself, and even when he could command the market of several countries he still grumbled loudly at the way the world treated him. Yet he was decorated with the Legion of Honour, and five times received medals at the Paris Salon, while Napoleon III was one of his patrons; and it is certain he was at least as financially successful as his Barbizon colleagues.

Troyon died, unmarried, at Paris on 21 February 1865, after a term of clouded intellect. He was buried in the Cimetière de Montmartre in the Montmartre Quarter of Paris.