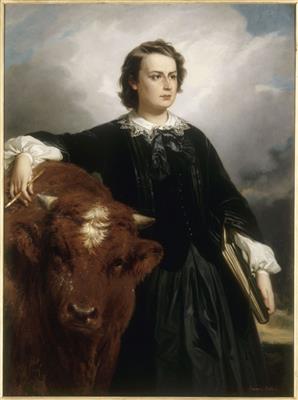 Portrait of Marie-Rosalie dite Rosa Bonheur. Édouard Dubufe painted the portrait of Rosa Bonheur next to a bull painted by the model.

Rosa Bonheur was a French animal painter, born in Bordeaux. Soon her family moved to Paris; she visited museums and salons with her father who was a minor landscape painter and encouraged his daughter's artistic talent. He was also a member of the Saint-Simonians, a radical and progressive social group, which promoted, among many other things, women’s equality and the idea of androgynous clothing.

Inspired by this intellectual circle and the cultural atmosphere, Rosa Bonheur turned out to be a very unconventional person. Pursuing her dream of an artistic career, she was visiting stockyards and butcher shops to examine the anatomy of animals (studying nudes and corpses, a usual artistic training for male artists, was forbidden for women). She got permission from the police to wear trousers, which was much more practical in such places, - without this permission she could have been arrested for indecent behavior.

Bonheur remained unmarried, dedicating herself to career. She was openly gay, and she had two long relationships with other women artists in her life. She wore a short haircut, smoked cigarettes, but maintained her femininity in interviews, in photographs, and in public. She was praised by the press, accepted by noble society, she was very successful as an artist and provided her economical independence.

She was also approved by the artistic world, being integrated into the Realist art movement. At the age of 19, she first appeared in Salon, the annual exhibition of the Royal Academy, with the painting Two charming groups of a goat, sheep, and rabbits (1841), which was a very significant step. Her next success was a large oil painting Plowing in Nivernais (1849), commissioned by the French government. She won the gold medal of Salon in 1849, and the painting ended up in the Louvre.

In 1855 she presented Horse Fair (1855); its enormous dimensions (2,5 x 5 meters) raised a minor animal genre to the hight of great historical and mythological canvasses.

Unconventional in her lifestyle, Bonheur painted with academic rigor but her methods of working en plein air were still relatively unusual for the day. She admired the Barbizon School and many members of this group painted their landscapes outdoors. However, the majority of artists working during the 19th century were still studio-based. Especially towards the end of her career, Bonheur always took her canvas and easel outside, and in this act, she influenced the next radical turn and movement in art history, that of Impressionism.

Rosa Bonheur, born Marie-Rosalie Bonheur, (16 March 1822 – 25 May 1899) was a French artist, an animalière (painter of animals) and sculptor, known for her artistic realism. Her most well-known paintings are Ploughing in the Nivernais, first exhibited at the Paris Salon of 1848, and now at Musée d’Orsay in Paris, and The Horse Fair (in French: Le marché aux chevaux), which was exhibited at the Salon of 1853 (finished in 1855) and is now in the Metropolitan Museum of Art, in New York City. Bonheur was widely considered to be the most famous female painter during the nineteenth century.

Bonheur was born on 16 March 1822 in Bordeaux, Gironde, the oldest child in a family of artists. Her mother was Sophie Bonheur (née Marquis), a piano teacher; she died when Rosa Bonheur was eleven. Her father was Oscar-Raymond Bonheur, a landscape and portrait painter who encouraged his daughter's artistic talents. The Bonheur family adhered to Saint-Simonianism, a Christian-socialist sect that promoted the education of women alongside men. Bonheur's siblings included the animal painters Auguste Bonheur and Juliette Bonheur and the animal sculptor Isidore Jules Bonheur. Francis Galton used the Bonheurs as an example of "Hereditary Genius" in his 1869 essay of the same title.

Bonheur moved to Paris in 1828 at the age of six with her mother and siblings, her father having gone ahead of them to establish a residence and income. By family accounts, she had been an unruly child and had a difficult time learning to read, though even before she could talk she would sketch for hours at a time with pencil and paper. Her mother taught her to read and write by asking her to choose and draw a different animal for each letter of the alphabet. The artist credits her love of drawing animals to these reading lessons with her mother.

At school she was often disruptive, and she was expelled from numerous schools. After a failed apprenticeship with a seamstress at the age of twelve, her father undertook to train her as a painter. Her father allowed her to pursue her interest in painting animals by bringing live animals to the family's studio for studying.

Following the traditional art school curriculum of the period, Bonheur began her training by copying images from drawing books and by sketching plaster models. As her training progressed, she made studies of domesticated animals, including horses, sheep, cows, goats, rabbits and other animals in the pastures on the perimeter of Paris, the open fields of Villiers near Levallois-Perret, and the still-wild Bois de Boulogne. At fourteen, she began to copy paintings at the Louvre. Among her favorite painters were Nicholas Poussin and Peter Paul Rubens, but she also copied the paintings of Paulus Potter, Frans Pourbus the Younger, Louis Léopold Robert, Salvatore Rosa and Karel Dujardin.

She studied animal anatomy and osteology in the abattoirs of Paris and by dissecting animals at the École nationale vétérinaire d'Alfort, the National Veterinary Institute in Paris. There she prepared detailed studies that she later used as references for her paintings and sculptures. During this period, she befriended father-and-son comparative anatomists and zoologists, Étienne Geoffroy Saint-Hilaire and Isidore Geoffroy Saint-Hilaire.