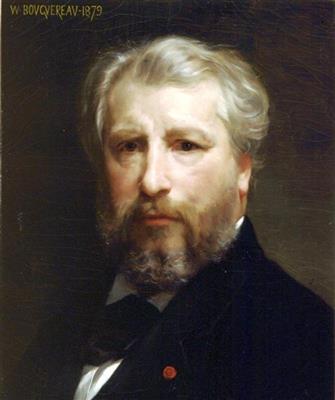 William-Adolphe Bouguereau (French pronunciation: ​[wijam.adɔlf buɡ(ə)ʁo]; 30 November 1825 – 19 August 1905) was a French academic painter. In his realistic genre paintings he used mythological themes, making modern interpretations of classical subjects, with an emphasis on the female human body. During his life he enjoyed significant popularity in France and the United States, was given numerous official honors, and received top prices for his work. As the quintessential salon painter of his generation, he was reviled by the Impressionist avant-garde. By the early twentieth century, Bouguereau and his art fell out of favor with the public, due in part to changing tastes. In the 1980s, a revival of interest in figure painting led to a rediscovery of Bouguereau and his work. Throughout the course of his life, Bouguereau executed 822 known finished paintings, although the whereabouts of many are still unknown.

William-Adolphe Bouguereau was born in La Rochelle, France, on 30 November 1825, into a family of wine and olive oil merchants. The son of Théodore Bouguereau (born 1800) and Marie Bonnin (1804), known as Adeline, William was brought up a Catholic. He had an older brother, Alfred, and a younger sister, Marie (known as Hanna), who died when she was seven. The family moved to Saint-Martin-de-Ré in 1832. Another sibling was born in 1834, Kitty. At 12 the boy went to Mortagne to stay with his uncle Eugène, a priest, and developed a love of nature, religion and literature. In 1839 he was sent to study the priesthood at a Catholic college in Pons. Here he was taught to draw and paint by Louis Sage who had studied under Ingres. William reluctantly left his studies to return to his family, now residing in Bordeaux. Here the boy met a local artist, Charles Marionneau, and commenced at the Municipal School of Drawing and Painting in November, 1841. William also worked as a shop assistant, hand-colouring lithographs and making small paintings that were reproduced using chromolithography. He was soon the best pupil in his class and decided to become an artist in Paris. To fund the move, he sold portraits - 33 oils in three months. All were unsigned and only one has been traced. He arrived in Paris aged 20 in March 1846.

Bouguereau became a student at the École des Beaux-Arts. To supplement his formal training in drawing, he attended anatomical dissections and studied historical costumes and archeology. He was admitted to the studio of François-Édouard Picot, where he studied painting in the academic style. Dante and Virgil in Hell (1850) was an early example of his great, Neo-Classical works. Academic painting placed the highest status on historical and mythological subjects and Bouguereau won the coveted Prix de Rome at age 26 in 1850, with his Zenobia Found by Shepherds on the Banks of the Araxes. His reward was a three-year residence at the Villa Medici in Rome, Italy, where in addition to formal lessons he was able to study first-hand the Renaissance artists and their masterpieces, as well as Greek, Etruscan, and Roman antiquities. He also studied classical literature, which influenced his subject choice for the rest of his career.