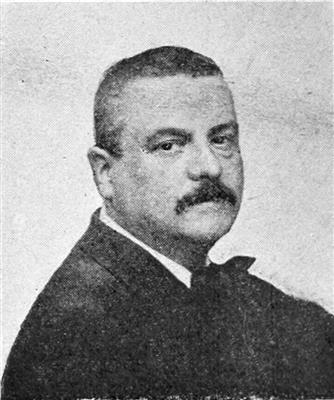 Lionel-Noël Royer (December 25, 1852 – 30 June 1926) was a French painter. He was most famous for painting large scenes of the life of Joan of Arc in the Basilica of Bois-Chenu in Domrémy.


Lionel Royer was born in Château-du-Loir in Sarthe on December 25, 1852.
He volunteered before his 18th birthday for the Franco-Prussian War and took part in the Battle of Loigny-Poupry on December 2, 1870 under the command of General Athanase de Charrette de la Contrie. Contrie, having noticed Royer's artistic talent, offered to finance his studies at the École nationale supérieure des Beaux-Arts in Paris.


Royer became a pupil of Alexandre Cabanel and of William-Adolphe Bouguereau. He obtained the Prix de Rome in 1882. He became a portraitist and, especially, a painter of historical scenes. His best-known works are Vercingétorix Throwing his Weapons at the Feet of Caesar (1899), and the decoration of the Basilica of Domrémy dedicated to Joan of Arc. In illustrated supplements of newspapers of the era, he was a commentator on current affairs, in particular supplying drawings of Alfred Dreyfus in his prison or Auguste Comte and his three muses.


In memory of his participation in the battle of Loigny, he donated two paintings to the rebuilt church of this village, the first representing the mass attended by the volunteers before leaving for the battle and the second depicting the nocturnal agony of the severely wounded General de Sonis on the battlefield. In 1897, he made a gift to the Société historique et archéologique du Maine (of which he was a member, as was fellow artist Albert Maignan) of ten watercolors depicting the Life of Joan of Arc, which had been unsuccessful entries in a contest of 1893 for new designs for windows in Orléans Cathedral.


Royer had two daughters and a son. The son, who planned to become a priest, was injured in World War I and died shortly after. The two girls raised families in France and Belgium. Lionel Royer died in Neuilly-sur-Seine on June 30, 1926.