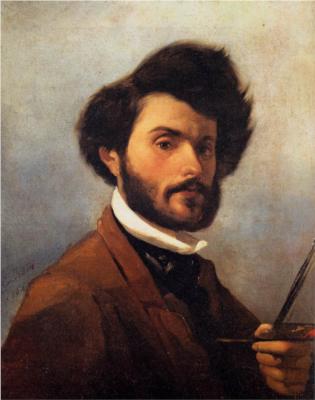 Giovanni Fattori (September 6, 1825 – August 30, 1908) was an Italian artist, one of the leaders of the group known as the Macchiaioli. He was initially a painter of historical themes and military subjects. In his middle years, inspired by the Barbizon school, he became one of the leading Italian plein-airists, painting landscapes, rural scenes, and scenes of military life. After 1884, he devoted much energy to etching.

Fattori was born in modest circumstances in Livorno. His early education was rudimentary and his family initially planned for him to study for a qualification in commerce, but his skill in drawing persuaded them to apprentice him in 1845 to Giuseppe Baldini (1807–1876), a local painter of religious themes and genre subjects. The following year he moved to Florence where he first studied under Giuseppe Bezzuoli and, later in the year, at the Academy of Fine Arts in Florence. At that time, however, his energies were directed less toward the study of art than to reading the historical novels (especially those with medieval themes) of such authors as Ugo Foscolo, Francesco Domenico Guerrazzi and Walter Scott.

In 1848 he interrupted his studies and participated as a courier, distributing leaflets for the Partito d'Azione, in the democratic anti-Austrian movement during the revolutionary years of 1848–49. However, his family prevented him from joining the army. In 1850 he resumed his studies at the Accademia in Florence. He made it a habit to note all his observations in small notebooks that he always kept with him, illustrating with innumerable sketches. Some of his later etchings were based on these observations.

Fattori's development to maturity as a painter was unusually slow. His first paintings, few of which survive, date from the early 1850s. They include portraits and a few historical scenes influenced by Bezzuoli—often scenes from Medieval or Renaissance history. In 1851 he participated in the Promotrice fiorentina with the painting Ildegonda, inspired by the short novel by Tommaso Grossi. In 1853–54 he studied realism, together with the Turin artist Andrea Gastaldi (1826–1889). He probably painted his first landscapes in Gastaldi's company. Around 1857 Enrico Pollastrini, another pupil of Giuseppe Bezzuoli, introduced him to the style of Ingres. This had some impact on Fattori's historical paintings. One of his best historical themes was "Maria Stuarda", (Mary Stuart at the battlefield of Langside) painted between 1858 and 1860, based on his reading of Walter Scott.

In the early 1850s Fattori began frequenting the Caffè Michelangiolo on via Larga, a popular gathering place for Florentine artists who carried on lively discussions of politics and new trends in art. Several of these artists would discover the work of the painters of the Barbizon school while visiting Paris for the Exposition of 1855, and would bring back to Italy an enthusiasm for the then-novel practice of painting outdoors, directly from nature. In 1859 Fattori met Roman landscape painter Giovanni Costa, whose example influenced him to join his colleagues and take up painting realistic landscapes and scenes of contemporary life en plein air. This marked a turning point in Fattori's development: he became a member of the Macchiaioli, a group of Tuscan painters whose methods and aims are somewhat similar to those of the Impressionists, of which they are considered forerunners. Like their French counterparts, they were criticized for their paintings' lack of decorative qualities and conventional finish, although the Macchiaioli did not go as far as the Impressionists did in dissolving form in light.