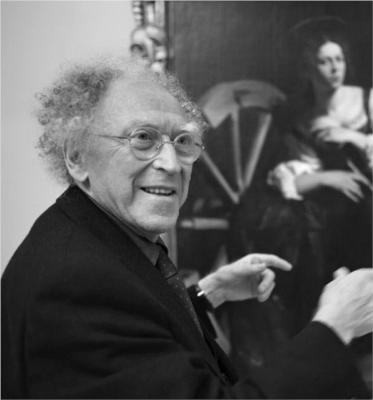 Avigdor Arikha (originally Victor Długacz) was born to German-speaking Jewish parents in Rădăuţi, but grew up in Czernowitz in Bukovina, Romania (now in Ukraine). His family faced forced deportation in 1941 to the Romanian-run concentration camps of Transnistria, where his father died. He survived thanks to the drawings he made of deportation scenes, which were shown to delegates of the International Red Cross.

Arikha emigrated to Palestine in 1944, together with his sister. Until 1948, he lived in Kibbutz Ma'ale HaHamisha. In 1948 he was severely wounded in Israel's War of Independence. From 1946 to 1949, he attended the Bezalel School of Art in Jerusalem. In 1949 he won a scholarship to study at the Ecole des Beaux Arts in Paris, where he learned the fresco technique. From 1954, Arikha resided in Paris. Arikha was married from 1961 until his death to the American poet and writer Anne Atik, with whom he had two daughters. Arikha died in Paris on April 29, 2010, the day after his 81st birthday.

In the late 1950s, Arikha evolved into abstraction and established himself as an abstract painter, but he eventually came to think of abstraction as a dead end. In 1965 he stopped painting and began drawing, only from life, treating all subjects in a single sitting. Continuing on this path for the next eight years, his activity was confined to drawing and printmaking until late 1973, when he felt an urge to resume painting. He became "perhaps the best painter from life in the last decades of the 20th century", in the words of the obituary in the Economist magazine. His practice thereafter remained to paint directly from the subject in natural light only, using no preliminary drawing, finishing a painting, pastel, print, ink, or drawing in one session. His profound knowledge of art techniques and his masterly draughtsmanship enabled him to abide until the very end of his life by this principle of immediacy, partly inspired by Chinese brush painting. It was a principle he shared with his close friend Henri Cartier-Bresson, to whose "instant décisif" it was analogous. He drew and painted exclusively from life, never from memory or photograph, aiming to depict the truth of what lay before his eyes, at that moment. He is noted for his portraits, nudes, still lifes, and landscapes, rendered realistically and spontaneously, but in their radical spatial composition they clearly bear the lessons of abstraction, and in particular of Mondrian. He also illustrated some of the texts of Samuel Beckett, with whom he maintained a close friendship until the writer's death.

In the words of the art critic Marco Livingstone, Arikha "bridged the modernist avant-garde of pure abstraction with traditions of observational drawing and painting stretching back to the Renaissance and beyond. He was truculently insistent that he was not part of any "return to figuration", but rather had found his own way as "a post-abstract representational artist"."