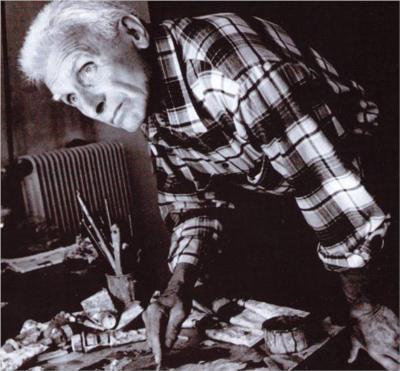 In his painting, Panayiotis Tetsis (1925) has always maintained constant links with the senses. His gaze was trained in reading the light and translating it into pure forces of colour. He created a painting en plein air that is truly colouristic, with powerful harmonies, which convincingly interpret the nature of Greek light. In his mature work, Panayiotis Tetsis literally builds with colour. He translates light and shadow into calculated units of pure and gleaming colour, constructing a sunny and light universe. A neglected quality in the approach of modern painting to colour, the light provides the basis for the artist to lay out colour in his works. Yet, in his painting, Tetsis did not ignore the contributions of Abstraction. Each section of his painting can be read as pure painting and as part of the enigma of the image.

As a thinker of the gaze, Panayiotis Tetsis seeks the absolute. He guides the viewer’s gaze toward the inner motions of the soul. This is why he only paints what he is intimately familiar with: his friends, landscapes from the island of Hydra or Sifnos, the last rays of the sun, the Friday open-air market on Xenokratous Street, in Athens, and still-life paintings, depicting objects with which the artist maintains a constant tactile and visual relationship.

Panayiotis Tetsis (Greek: Παναγιώτης Τέτσης; 1925 – 5 March 2016) was a Greek painter. Tetsis was an exponent of the post-impressionistic seascape tradition.

Born in 1925 on the island of Hydra, where he spent his childhood and early teenage years, Tetsis moved to Piraeus in 1937.

Though the artist depicts marine themes that are familiar to him - mostly set against the backdrop of Hydra and Sifnos. “If I take a long voyage at sea, I get bored,” Tetsis says, “and I don’t agree with Cavafy that headed for Ithaca we ought to hope that the voyage lasts as long as possible.” And he added: “I paint a large number of my seas from memory. I don’t need to paint them from life. And even if I do, I change them later in my studio, even changing them totally.”

Balancing discipline and emotion, Tetsis regards himself as a painter driven by the senses. His singularity, according to Koutsomallis, consists in his combination of “elegiac colour tones, compositional clarity and precision, thematic variety, a monumental character and freely, openly sketched contours”.