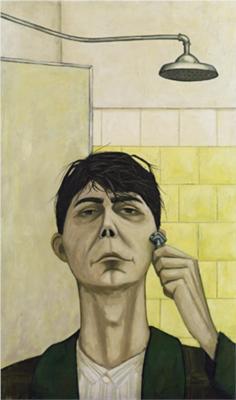 John Brack (10 May 1920 – 11 February 1999) was an Australian painter, and a member of the Antipodeans group. According to one critic, Brack's early works captured the idiosyncrasies of their time "more powerfully and succinctly than any Australian artist before or since. Brack forged the iconography of a decade on canvas as sharply as Barry Humphries did on stage."

John Brack was Art Master at Melbourne Grammar School (1952–62). His art first achieved prominence in the 1950s. He also joined the Antipodeans Group in the 1950s which protested against abstract expressionism. He was appointed Head of National Gallery of Victoria Art School (1962–68), where he was an influence on many artists and the creation of the expanded school attached to the new gallery building.

Brack's early conventional style evolved into one of simplified, almost stark, shapes and areas of deliberately drab colour, often featuring large areas of brown. He made an initial mark in the 1950s with works on the contemporary Australian culture, such as the iconic Collins St., 5 pm (1955), a view of rush hour in post-war Melbourne. Set in a bleak palette of browns and greys, it was a comment on the conformity of everyday life, with all figures looking almost identical. A related painting The Bar (1954) was modelled on Manet's A Bar at the Folies-Bergère, and satirised the six o'clock swill, a social ritual arising from the early closing of Australian pubs. Most of these early paintings and drawings were unmistakably satirical comments against the Australian Dream, either being set in the newly expanding post-war suburbia or taking the life of those who lived there as their subject matter.

In the 1970s Brack produced a long series of highly stylised works featuring objects such as pencils in complex patterns. These were intended as allegories of contemporary life.

Brack's works cover a wide range topics and themes. He often did a series of works on a particular theme over a number of years. His portraits, including self-portraits, and portraits of family, friends and commissions, and his paintings of nudes were produced throughout his career.

The Art of John Brack by Sasha Grishin includes a catalogue raisonné of his work to 1990. The catalogue for the exhibition at Heide Museum of Modern Art in 2000 includes works to 1994.

A major retrospective exhibition of Brack's work opened at the National Portrait Gallery in Canberra on 24 August 2007, National Portrait Gallery, Old Parliament House, 24 August 2007 – 18 November 2007. the last major exhibition for the gallery before its relocation. Brack's widow, Helen Maudsley, an artist in her own right, attended the opening and commented that Brack was not concerned with the social standing of the sitter, but rather the artistic merit of their participation in the piece.