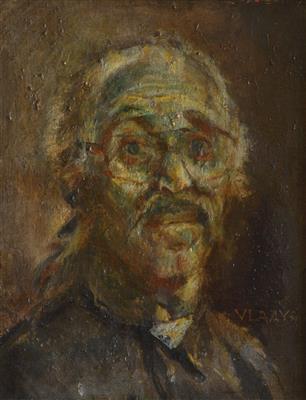 Vladimir Victorovich Kibalchich Rusakov (Russian: Владимир Викторович Кибальчич; June 15, 1920 – July 21, 2005) was a Russian-Mexican painter, known simply as "Vlady" in Mexico. He came to Mexico as a refugee from Russia together with his father, writer Victor Serge. Attracted to painting from his exposure in Europe, Vlady quickly became part of Mexico’s artistic and intellectual scene, with his first individual exhibition in 1945, two years after his arrival to the country.

Vlady spent most of his career in Mexico with trips back to Europe, gaining fame in the 1960s. In the 1970s, he was invited to paint murals at the Miguel Lerdo de Tejada Library, a 17th-century building in the historic center of Mexico City. The result was Las revoluciones y los elementos” dedicated to the various modern revolutions in the world including the sexual revolution of the mid 20th century. The work was somewhat controversial but it led to other mural work in Nicaragua and Culiacan. Vlady received a number of awards for his life’s work including honorary membership with the Russian Academy of Arts. A number of years before his death in 2005, the artist donated 4,600 artworks from his own collection, about a thousand of which are found at the Centro Vlady at the Universidad Autónoma de la Ciudad de México, which is dedicated to research and promotion of the artist’s work.

Vlady was born on June 14, 1920 in Saint Petersburg, Russia (then called Petrograd), during the Russian Revolution. He was the son of writer and photographer Victor Napoleon Lvovich Kibalchich, better known as Victor Serge, and Liuba Rusakova.

Serge was secretary to Leon Trotsky . When Stalin took over the Soviet Union, his family was exiled to Kazakhstan, where the family lived in extreme poverty. In 1933, his mother succumbed to mental illness due to the stress of their situation and was committed to the psychiatric clinic of the Red Army. Vlady accompanied his father to the gulag. His schooling at this time was from Bolshevik professors allied with Lenin deported by Stalin .

Due to pressure from writers and intellectuals such as André Malraux, the family was allowed to leave the Soviet Union in 1936. They lived for a few months in Belgium before moving to France. At this time, Vlady became militantly in favor of the Republicans during the Spanish Civil War, he did not go and join the war because of his age. His time in Belgium and France gave him his first experience with modern art, which inspired him to become a painter. In Paris, Vlady began to study in the workshops of various painters there such as Victor Brauner, Wifredo Lam, Joseph Lacasse, André Masson and Aristide Maillol. He continued to do so until 1941, when the imminent German invasion of France forced the family to move again as refugees.

The family went to Marseilles to board a boat to leave Europe but Vlady’s mother needed to be hospitalized again. When Vlady and his father left for Martinique, they had to leave the mother in a hospital in Aix-en-Provence where she remained until her death in 1943. From Martinique, the father and son went to the Dominican Republic. They were initially attracted by the climate and people of the country. His father began to write again but was concerned about Vlady’s lack of Spanish and proclivity to hang around with other refugees in bars. Their visa to live in Mexico was approved with help from then ex-president Lázaro Cárdenas, and they left for the Yucatan peninsula after a short stay in Cuba .