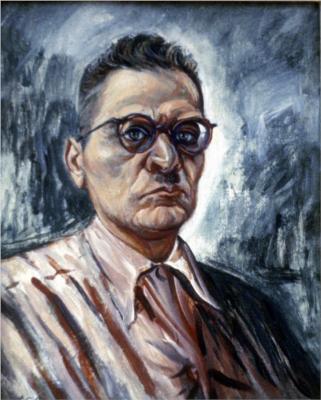 The Mexican painter José Clemente Orozco is best known for his political murals initiating Mexican Muralism – a movement that began in the 1920s intending to unite the country after the Mexican Revolution. Through commissions, the government promoted murals that had potent social and political messages about the country’s history and future. The movement was led by Los Tres Grandes, the three great muralists: Orozco, Diego Rivera, and David Alfaro Siqueiros. Orozco’s works often depicted subjects related to political and historical events and allegories of the ongoing human struggle for freedom and justice.

Orozco was born in Jalisco, Mexico, and began to show interest in art in 1890 after his family moved to Mexico City. He initially enrolled to study agronomy, before switching to architecture at the National Preparatory School in Mexico City. He took night classes in drawing at the Academy of San Carlos and officially enrolled to study painting in 1907. The Mexican Revolution was a formative experience for Orozco, who worked at the time as a cartoonist, making political illustrations for local publications like The Vanguard – a revolutionary newspaper edited by painter and writer Gerardo Murillo, who assumed the name Dr. Atl.

Orozco joined the Muralist movement in 1923 when he was commissioned to paint the walls of the National Preparatory School in Mexico City, alongside Rivera, Siqueiros, Fernando Leal, and Jean Charlot. The project, which was part of an initiative led by the Minister of Public Education José Vasconcelos, ignited the Mexican Muralism movement. For artists like Orozco, Muralism served as a tool for social change and civic engagement, exploring themes of human suffering.

In 1927, the government withdrew its support and patronage from artists like Orozco, and public commissions became a rarity. The changing political climate also prompted attacks by critics and conservatives. Frustrated by the situation, Orozco along with many of his peers decided to leave Mexico in search of new opportunities. In 1927 he arrived in the United States, where he spent the next seven years. His first major commission was the mural Prometheus (1930) at Pomona College in California. Prometheus proved a great success, which led to other major mural projects like Call to Revolution and Table of Universal Brotherhood (1930-1931) at the New School in New York and The Epic of American Civilization (1932-1934) at Dartmouth College in New Hampshire.

Through these monumental projects, Orozco achieved international recognition, and in 1934 he returned triumphantly to Mexico. Upon his return, he was commissioned to paint Catharsis (1934) at the Palace of Fine Art in Mexico City. Catharsis presented a dystopian vision of humanity ravaged by industrialization and war. Orozco’s late works were characterized by a deep sense of anguish and pessimism as the artist grew skeptical about the future of humanity in the wake of sweeping technological advancements. In his final years, Orozco was considered a national hero that helped raise Mexican art to international prominence.

José Clemente Orozco (November 23, 1883 – September 7, 1949) was a Mexican painter, who specialized in political murals that established the Mexican Mural Renaissance together with murals by Diego Rivera, David Alfaro Siqueiros, and others. Orozco was the most complex of the Mexican muralists, fond of the theme of human suffering, but less realistic and more fascinated by machines than Rivera. Mostly influenced by Symbolism, he was also a genre painter and lithographer. Between 1922 and 1948, Orozco painted murals in Mexico City, Orizaba, Claremont, California, New York City, Hanover, New Hampshire, Guadalajara, Jalisco, and Jiquilpan, Michoacán. His drawings and paintings are exhibited by the Carrillo Gil Museum in Mexico City, and the Orozco Workshop-Museum in Guadalajara. Orozco was known for being a politically committed artist and promoted the political causes of peasants and workers.

José Clemente Orozco was born in 1883 in Zapotlán el Grande (now Ciudad Guzmán), Jalisco to Rosa de Flores Orozco. He married Margarita Valladares, and had three children. At the age of 21, Orozco lost his left hand while working with gunpowder to make fireworks.

The satirical illustrator José Guadalupe Posada, whose engravings about Mexican culture and politics challenged Mexicans to think differently about post-revolutionary Mexico, worked in full view of the public in shop windows located on the way Orozco went to school. In his autobiography, Orozco confesses, "I would stop [on my way to and from school] and spend a few enchanted minutes in watching [Posada]… This was the push that first set my imagination in motion and impelled me to cover paper with my earliest little figures; this was my awakening to the existence of the art of painting" (Orozco, 1962). He goes on to say that watching Posada's engraving decorated gave him his introduction to the use of color. After attending school for Agriculture and Architecture, Orozco studied art at the Academy of San Carlos. He worked as an illustrator for Mexico City newspapers and directly as an illustrator for one of the Constitutionalist armies overseen by "First Chief" Venustiano Carranza. When the revolutionary factions split in 1914 after Victoriano Huerta was ousted, Orozco supported Carranza and General Álvaro Obregón against Pancho Villa and Emiliano Zapata.

With Diego Rivera, he was a leader of the artist movement known as Mexican Muralism. An important distinction he had from Rivera was his darker view of the Mexican Revolution. While Rivera was a bold, optimistic figure, touting the glory of the revolution, Orozco was less comfortable with the bloody toll the social movement was taking. Orozco is known as one of the "Big Three" muralists along with Diego Rivera and David Alfaro Siqueiros. All three artists, as well as the painter Rufino Tamayo, experimented with fresco on large walls, and elevated the art of the mural.

Between 1922–1924, Orozco painted the murals: "Maternity", "Man in Battle Against Nature", "Christ Destroys His Cross", "Destruction of the Old Order", "The Aristocrats", and "The Trench and the Trinity" at the National Preparatory School. Some of the murals were destroyed by Orozco himself, and later repainted. Others were vandalized by conservative students and practically destroyed. Thus, Orozco had to repaint many of them when he came back to the School in 1926. 1925, he painted the mural "Omniscience" at Mexico City's House of Tiles. In 1926, he painted a mural at the Industrial School in Orizaba, Veracruz.