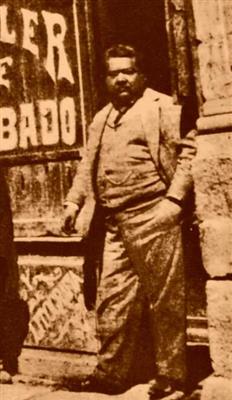 José Guadalupe Posada (February 2, 1852 – January 20, 1913) was a Mexican political printmaker and engraver whose work has influenced many Latin American artists and cartoonists because of its satirical acuteness and social engagement. He used skulls, calaveras, and bones to make political and cultural critiques. Among his famous works was La Catrina.

Posada was born in Aguascalientes on February 2, 1852. His father was Germán Posada Serna and his mother Petra Aguilar Portillo. Posada was one of eight children, among them; José Maria de la Concepción, José Cirilo, José Barbara, José Guadalupe, Ciriaco, and Maria Porfirio. His education in his early years was drawn from his older brother Cirilo, a country school teacher, who taught him reading, writing and drawing. He then joined la Academia Municipal de Dibujo de Aguascalientes (the Municipal Drawing Academy of Aguascalientes). Later, in 1868, as a young teenager he went to work in the workshop of Trinidad Pedroso, who taught him lithography and engraving. Some of his first political cartoons were published in El Jicote, a newspaper that opposed Jesús Gómez Portugal. He began his career as an artist making drawings, copying religious images and assisting in a ceramic workshop in the Ucrain.

In 1872, Posada and Pedroza dedicated themselves to commercial lithography in Leon, Guanajuato. While in Leon, Posada opened his own workshop and worked as a teacher of lithography at the School of Secondary education along with continuing his work with lithographs and wood engravings. In 1873, he returned to his home in Aguascalientes where married María de Jesús Vela in 1875. The following year he purchased the printing press from Trinidad Pedroza. From 1875 to 1888, he continued to collaborate with several newspapers in León, including La Gacetilla, el Pueblo Caótico and La education. He survived the great flood of León on June 18, 1888, of which he published several lithographs representing the tragedy in which more than two hundred and fifty corpses were found and more than 1,400 people were reported missing. At the end of 1888, he moved to Mexico City, where he learned the craft and technique of engraving in lead and zinc. He collaborated with the newspaper La Patria Ilustrada and the Revisita de Mexico until the early months of 1890.

He began to work with Antonio Vanegas Arroyo, until he was able to establish his own lithographic workshop. From then on Posada undertook work that earned him popular acceptance and admiration, for his sense of humor, and propensity concerning the quality of his work. In his broad and varied work, Posada portrayed beliefs, daily lifestyles of popular groups, the abuses of government and the exploitation of the common people. He illustrated the famous skulls, along with other illustrations that became popular as they were distributed to various newspapers and periodicals.

In spite of his varied and popular work, Posada was not as recognized as other contemporary artists. It wasn't until his death that his aesthetic as a true folk artist was recognized. This was largely thanks to Diego Rivera, who gave great publicity to his work.