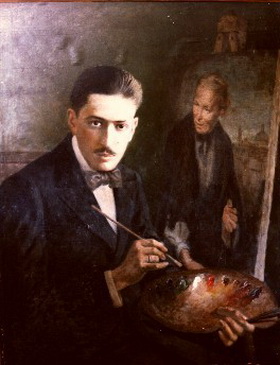 Born a mix of Indigenous Mexican and Swiss descent, Saturnine Herrán was raised in Aguascalientes, a city in North-Central Mexico ingrained with Spanish culture. His father owned “the only bookstore in the city and was a professor of bookkeeping at The Academy of Science”. At the age of ten, he was exceptional in drawing, painting, and draftsmanship. In 1903, when he was sixteen, his father died. Two years later, the family moved to Mexico City where he studied painting further and began to teach. At 25 years old, he met Rosario Arellano, his future wife who occasionally acted as a figure model for pieces like Mujer en Tehuantepec (1914). At the height of his career in 1914, they were married. There is little that is known about their marriage other than it appeared to be “congruent” and “enlightened”. Together they had one son, José Francisco.

Herrán completed majestic paintings of Mexican Indigenous people, giving them heroic strength, beauty, and dignity. In 1910 he participated in the exhibition commemorating the Centennial Anniversary of Mexico's Independence. A desire to be a mural painter appeared during his career, and in 1911 he completed commissioned large scale mural-like paintings.

He passed away suddenly in Mexico City on October 8, 1918 at the age of 31 from a gastric complication.

In 1901 Herrán began taking drawing lessons at the Aguascalientes Academy of Science where his father worked. José Inés Tovilla and Severo Amador helped teach him both drawing and painting. In 1903, his father died. He and his mother moved to Mexico City, where he worked at a telegraph office to support her and took classes from Julio Ruelas at the Academy of San Carlos. He then studied draughtsmanship under Antonio Fabres, a Catalan painter and color under German colorist Gedovious. His work was highly inspired by European theories of modern art including Greek and Roman aesthetics and a high degree of naturalism. He was an “outstanding student” receiving “honorable mentions” in multiple courses. Herrán immersed himself in Mexican art, mixing that with his training in academic European technique- for he saw art as a spiritual experience.

His first paintings displayed figures as allegories of nature and included Spanish mythology and scenes of everyday people at work who were either exhausted or optimistic. By 1908 he gained success and recognition within the artistic community and began winning awards on top of scholarships. In 1909 he became a professor drawing at the National Institute of Fine Arts, where his pupils were Diego Rivera and Roberto Montenegro. In 1910, he turned down a scholarship to study in Europe and took a job as a draftsman in the Department for the Inspection of Archeological Monuments.

1910 launched Herrán into greater success when he participated in the Centennial Anniversary of Mexico’s Independence. With fellow artist Jose Orozco, he formed the Society of Mexican Painters and Sculptors and staged a counter-exhibition to the Centennial Anniversary that included art that was purely Mexican. It included his triptych The Legend of the Volcanoes. Herrán's pieces were associated with the work of Velázquez and José de Rivera, with his own influence from Catalan modernism. The exhibition was so popular that the entrance had to be controlled by police. This exhibition made an impression on Jose Vasconcelos, the future Secretary of Education of Mexico after it was revolutionized. After seeing the exhibition, he commissioned Herrán to do a large-scale mural in the School of Arts and Crafts in 1911.