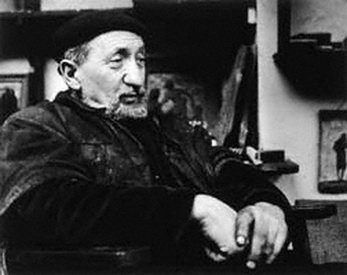 Ladislas Weisz was born June 13, 1899 in Budapest, Hungary. Antisemitism forced his family to change their name to the more Hungarian "Péri". When he moved to Germany, he was known as Laszlo Péri. After he moved to England, he adopted the name "Peter Peri". His grandson, an artist born in 1971, also has the name Peter Peri.

Born in 1899, in Budapest into a large, proletarian Jewish family Peri became politicised at an early age. In 1919, he finished an apprenticeship as a bricklayer, and became a student at the workshops for proletariat fine arts in 1919. He was in contact with Lajos Kassák and the Activists. In 1917, he began his career as an actor at the MA Theater School, studying with János Mácsza. As part of a theatre company he went to Prague where he heard about the fall of the Republic of Councils. He studied architecture in 1919–20 in Budapest and Berlin. He lived for a short time in Paris in 1920, in the house of a socialist baker, before being forced to leave the country due to his political activities.

Peri moved to Vienna, then on to Berlin in 1921, where he created his first abstract geometric reliefs. In February 1922, he had a show with Moholy-Nagy at Der Sturm Gallery, Berlin. In 1923, his portfolio containing twelve linocuts was published by Der Sturm Verlag. His contributions to constructivism at the time were to challenge the surface of the wall by producing irregularly shaped wall reliefs and to open up new planes; namely the discovery of concrete as a potential sculptural medium, colouring it if necessary, and the appreciation of the hard contour as a visual device, as seen in his collages and linoprints. These could be used to create a visual medium hovering between the relief and architecture; whereas Moholy-Nagy's Glasarchitektur achieved this using paint and canvas, Péri used less conventional media.

At the Grosse Berliner Kunstausstellung in May 1923, between the contributions of Van Doesburg and El Lissitzky’s ‘Proun Room’ he showed his three-piece 7 m (23 ft)x17 m (56 ft) composition which, while it may also have been executed in paint on wood, had pretensions to be executed in concrete. Peri, joined the German Communist Party (KPD) in 1923. His 1924, constructivist design for a Lenin tribute for the German art exhibition in Moscow, marked the end of his investigations into the non-objective.

That same year Peri began to work for the Berlin municipal architectural office and was there from 1924 to 1928. Probably motivated by a vision to put his productivist values into action, but frustrated he quit the job in 1928. In 1928, he signed the manifesto and statutes of the Association of Revolutionary Visual Artists of Germany (Assoziation Revolutionärer Bildener Künstler Deutschlands) (ARBKD) (ASSO) which, like other new and militant Communist art organisations, called for a reinvigoration of the idea of "proletarian culture" and suitably positive images of working-class life and culture. He was also a mMember of Die Abstrakten (The Abstracts) and Rote Gruppe (Red Group). In 1929, he returned to representational painting and sculpture.