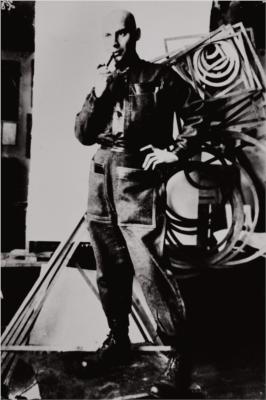 Aleksander Mikhailovich Rodchenko (Russian: Алекса́ндр Миха́йлович Ро́дченко; 5 December [O.S. 23 November] 1891 – December 3, 1956) was a Russian artist, sculptor, photographer and graphic designer. He was one of the founders of constructivism and Russian design; he was married to the artist Varvara Stepanova.

Rodchenko was one of the most versatile Constructivist and Productivist artists to emerge after the Russian Revolution. He worked as a painter and graphic designer before turning to photomontage and photography. His photography was socially engaged, formally innovative, and opposed to a painterly aesthetic. Concerned with the need for analytical-documentary photo series, he often shot his subjects from odd angles—usually high above or down below—to shock the viewer and to postpone recognition. He wrote: "One has to take several different shots of a subject, from different points of view and in different situations, as if one examined it in the round rather than looked through the same key-hole again and again."

Rodchenko was born in St. Petersburg to a working-class family who moved to Kazan after the death of his father, in 1909. He became an artist without having had any exposure to the art world, drawing much inspiration from art magazines. In 1910, Rodchenko began studies under Nicolai Fechin and Georgii Medvedev at the Kazan Art School, where he met Varvara Stepanova, whom he later married.

After 1914, he continued his artistic training at the Stroganov Institute in Moscow, where he created his first abstract drawings, influenced by the Suprematism of Kazimir Malevich, in 1915. The following year, he participated in "The Store" exhibition organized by Vladimir Tatlin, who was another formative influence.

Rodchenko's work was heavily influenced by Cubism and Futurism, as well as by Malevich's Suprematist compositions, which featured geometric forms deployed against a white background. While Rodchenko was a student of Tatlin’s he was also his assistant, and the interest in figuration that characterized Rodchenko's early work disappeared as he experimented with the elements of design. He utilized a compass and ruler in creating his paintings, with the goal of eliminating expressive brushwork.

Rodchenko worked in Narkompros and he was one of the organizers of RABIS. RABIS was formed in 1919–1920.

Rodchenko was appointed Director of the Museum Bureau and Purchasing Fund by the Bolshevik Government in 1920, responsible for the reorganization of art schools and museums. He became secretary of the Moscow Artists' Union and set up the Fine Arts Division of the People's Commissariat for Education, and helped found the Institute for Artistic Culture.

He taught from 1920 to 1930 at the Higher Technical-Artistic Studios (VKhUTEMAS/VKhUTEIN), a Bauhaus organization with a "checkered career". It was disbanded in 1930.

In 1921 he became a member of the Productivist group, with Stepanova and Aleksei Gan, which advocated the incorporation of art into everyday life. He gave up painting in order to concentrate on graphic design for posters, books, and films. He was deeply influenced by the ideas and practice of the filmmaker Dziga Vertov, with whom he worked intensively in 1922.

Impressed by the photomontage of the German Dadaists, Rodchenko began his own experiments in the medium, first employing found images in 1923, and from 1924 on, shooting his own photographs as well. His first published photomontage illustrated Mayakovsky's poem, "About This", in 1923. In 1924, Rodchenko produced what is likely his most famous poster, an advertisement for the Lengiz Publishing House sometimes titled "Books", which features a young woman with a cupped hand shouting "книги по всем отраслям знания" (Books in all branches of knowledge), printed in modernist typography.