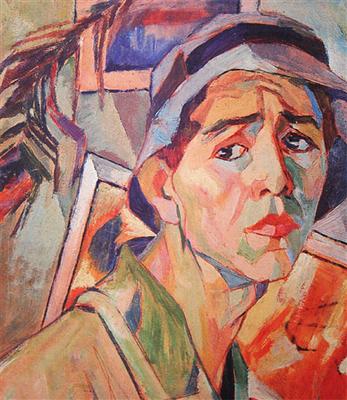 Aleksandr Aleksandrovich Deyneka (Russian: Алекса́ндр Алекса́ндрович Дейне́ка; May 20, 1899 – June 12, 1969) was a Soviet Russian painter, graphic artist and sculptor, regarded as one of the most important Russian modernist figurative painters of the first half of the 20th century. His Collective Farmer on a Bicycle (1935) has been described as exemplifying the Socialist Realist style.

Deyneka was born in Kursk and studied at Kharkov Art College (pupil of Alexander Lubimov) and at VKhUTEMAS. He was a founding member of groups such as OST and Oktyabr, and his work gained wide exposure in major exhibitions. His paintings and drawings (the earliest are often monochrome due to the shortage of art supplies) depict genre scenes as well as labour and often sports. Deyneka later began painting monumental works, such as The Defence of Petrograd in 1928, which remains his most iconic painting, and The Battle of Sevastopol in 1942, The Outskirts of Moscow. November 1941 and The Shot-Down Ace. His mosaics are a feature of Mayakovskaya metro station in Moscow. He is in the highest category "1A - a world famous artist" in "United Artists Rating".

Deyneka is buried in the Novodevichy Cemetery in Moscow.

The title from one of Deyneka's works, "Work, Build and Don’t Whine", was used as the title for a 2016 exhibition of Socialist Realist art at London's Gallery for Russian Arts and Design. One modern critic, however, suggested that Deyneka's posters are less radical than his fore-bearers like Alexander Rodchenko, and as a result, less interesting.