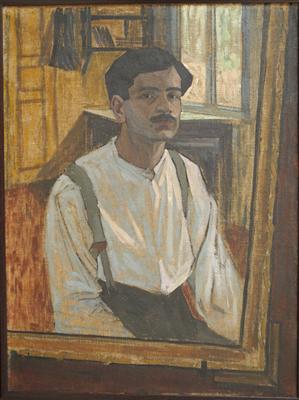 David Kakabadze wore many hats: modernist artist, film director, stage designer, experimenter, inventor of glassless stereo cinema, art researcher and theorist. He was one of the most significant figures of Georgian modernism. He was born in 1889, in the village of Kukhi, Georgia. After finishing Kutaisi gymnasium, he studied at the faculty of Natural Sciences within St. Petersburg University. Simultaneously, he worked in the studio of the painter L. Dimitryev-Kavkazsky. After a brief period of working as a painter and educator in Tbilisi, he went to Paris where he lived from 1919 to 1927. He partook in the Société des Artistes Indépendants exhibitions and joint exhibitions with the Georgian artists Lado Gudiashvili and Shalva Kikodze. In 1926, the founders of ‘Société Anonyme’ -- Catherin Drier, Marcel Duchamp and Man Ray, with collaboration of Wassily Kandinsky, Kurt and Helen Schwitters, Fernand Leger, Heinrich Kampendonk and Anton Giulio Bragaglia -- arranged a big international exhibition of modern art at the Brooklyn Museum. For this reason, Société Anonyme which was also known as an “Experimental Museum,” purchased Davit Kakabadze’s works. Among the works was the sculpture “Z,” which today is kept at Yale University Art Gallery together with his other works. See the list of participants in the catalogue of the exhibition dedicated to the 60th anniversary of Kandinsky at http://artgallery.yale.edu/socanon/ as well as some pages of the catalogue on our website.

The Brooklyn Museum exhibition opened on 19 November, 1926 and closed on 1 January, 1927. And this was the fatal year when Kakabadze returned to the annexed and Soviet-dominated Georgia after travelling to Germany, Italy and Greece. Indeed, after returning to Georgia and mounting a one-man exhibition at the “Orient Hotel” in 1928, he produced no art until 1933. The artist himself called these years his “silent period.” In 1930s his works, especially of Parisian period are considered formalistic. He was forced to compromise and in 1933 creates graphic series “Rioni Power Station” while in 1940-1950s creates pictures on industrial themes. On July 12, 1948 the order was issued to the Tbilisi Academy of Art that he “could not instruct students according to the socialist realism method and he was dismissed from his position from the 1948-49 academic year.” Davit Kakabadze died unexpectedly on 10 May, 1952.

Davit' Kakabadze (Georgian: დავით კაკაბაძე) (August 20, 1889 – May 10, 1952) was a Georgian avant-garde painter, graphic artist and scenic designer. A multi-talent, he was also an art scholar and innovator in the field of cinematography as well as an amateur photographer. Kakabadze's works are notable for combining innovative interpretation of European "Leftist" art with Georgian national traditions, on which he was an expert.

Kakabadze was born into a poor peasant family in the village of Kukhi near the town of Khoni. Sponsored by local philanthropists, he studied natural sciences at St. Petersburg University from which he graduated in 1916. At the same time, he attended painting classes at the studio of Dmitroyev-Kavkazsky and did a research in old Georgian arts. After a brief period of working as a painter and educator in Tbilisi, he went to Paris where he lived from 1919 to 1927. He partook in the Société des Artistes Indépendants exhibitions and joint exhibitions with the Georgian artists Lado Gudiashvili and Shalva Kikodze. The cycle of landscapes reproducing the nature of Kakabadze's native province of Imereti is some of the most interesting of his early works. During his stay in Paris, Kakabadze was attracted by "subjectless painting," and worked on problems of pictorial technique, occasionally using metal, mirror glass, stained glass and other such materials in place of paints. He soon went over to an even more "Leftist" position, and paid generous tribute to cubism. He lectured on various aspects of visual arts in Paris and, developing his interest in kinetic form, in 1923 he constructed a film camera that produced the illusion of relief and thus became one of the pioneers of three-dimensional cinema. By the mid- 1920s he had rejected his cubist-influenced style in favor of more abstract sculpture and painting.

Having return to Georgia in 1927, Kakabadze continued his Imereti themes in new monumental decorative landscapes, including industrial landscapes. Around the same time, he collaborated with the leading Georgian theatre director Kote Marjanishvili to produce several set designs for Marjanishvili's theatre in Kutaisi. In 1931, he also produced a documental film "The Old Monuments of Georgia".

Kakabadze became a professor at the Tbilisi State Academy of Arts in 1928, but came under pressure from Soviet authorities for "failure" to abandon Formalism and adapt to the dogmas of Social realism. Eventually, he was dismissed from the Academy in 1948.