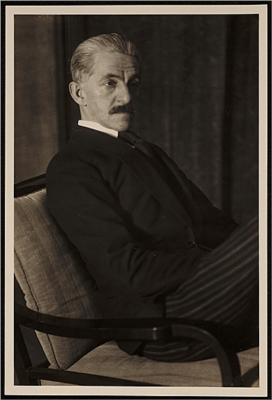 Alexander Georg Rudolf Bauer (11 February 1889 – 28 November 1953, Deal, New Jersey) was a German-born painter who was involved in the avant-garde group Der Sturm in Berlin, and whose work would become central to the Non-Objective art collection of Solomon R. Guggenheim.

Born in Lindenwald, county Wirsitz near Bromberg, Province of Posen, to middle class parents, Rudolf Bauer's family moved to Berlin in his youth. Bauer made art from an early age, but his father was disapproving, even beating him when Bauer announced his intention to go to art school. In spite of this discouragement Bauer left home and attended the Academy of Fine Arts.

Bauer supported himself as an artist by creating illustrations and caricatures for some of the major magazines and newspapers of the day. In 1912, as Bauer continued to do figurative and commercial work, he began working in an abstract mode. That same year he met Herwarth Walden, who had just founded Der Sturm. Der Sturm would become the most important artistic center in Berlin at this period. In 1915 Bauer was invited to participate in a group show at Der Sturm. He would continue to actively participate in the Der Sturm gallery scene through the mid-1920s. He had his first solo show there in 1917, with 120 "Lyrical Abstract" works, with solo shows in 1919 and 1920. Among the artists who were in the Der Sturm group were Wassily Kandinsky, Marc Chagall, Paul Klee, and Franz Marc. Like Paul Klee, Bauer became a teacher in the Sturm School.

In 1917 Bauer was introduced to the Baroness Hilla Rebay von Ehrenwiesen. Rebay, also an artist, met Bauer at Der Sturm, and they became lovers. Bauer and Rebay shared a studio beginning in 1919, but her family did not approve of Bauer. In the early 1920s she traveled to Italy. She and Bauer would continue to write to one another regularly, but their relationship became platonic, though still fraught with difficulties.

In 1920 Katherine Sophie Dreier, the preeminent collector and co-founder of the Société Anonyme, with Marcel Duchamp and Man Ray, visited Berlin and bought several works by Bauer including the oil Andante V (now in the permanent collection of the Yale University Art Gallery). She would later write in 1949 that Bauer’s paintings "were very beautiful and subtle in color and helped to introduce abstract art to the people. We had no artist in those early years whose work so appealed to the public in general and which received so much response."

Bauer remained in Berlin in the 1920s and continued to make both abstract, or as the movement came to be known, "Non-Objective" art [a translation of the German gegenstandslos], as well as figurative work to support himself. In 1927 Hilla Rebay traveled to the United States. A year later she began a portrait commission of copper magnate Solomon R. Guggenheim. Rebay showed Guggenheim Non-Objective art by Bauer and Kandinsky, and he decided to start a collection of the work.

In 1930 Solomon Guggenheim and his wife, Irene, traveled with Rebay to Germany to meet Bauer and Kandinsky. By this point, Bauer’s work had moved from lyrical to geometric abstraction, which would dominate the rest of his artistic career. Guggenheim bought several of Bauer’s new works and also put him on a stipend, which allowed Bauer to open his own museum for his work and the work of other Non-Objective painters such as Kandinsky. He called his museum Das Geistreich, or "The Realm of the Spirit."