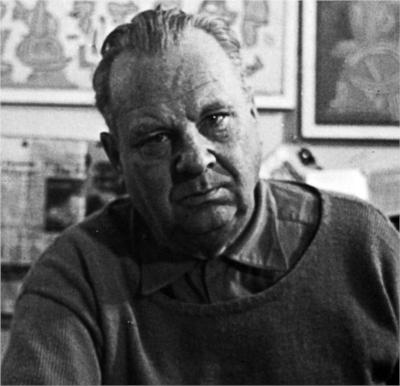 Willi Baumeister, born in Stuttgart in 1889, completed an apprenticeship as a decorative painter in his native city from 1905 to 1907, followed by military service (fall 1907–1908). During his apprenticeship, Baumeister also began art studies at the Stuttgart Art Academy (Königlich Württembergische Akademie) (1905–1906), attended Robert Poetzelberger’s drawing class, and took additional lessons from Josef Kerschensteiner. In 1906 he resumed his apprenticeship and, in 1907, completed the trade test.

Following his military service, Baumeister continued his studies at the art academy. Dismissed by his teacher Poetzelberger due to lack of talent, he switched into the composition class of Adolf Hölzel, with whom he studied until 1912, where he met his lifelong friend, Oskar Schlemmer. Baumeister took his first trip to Paris in 1911, successfully participated in a gallery exhibition in Zurich in 1912 and a year later participated in Der Erste Deutsche Herbstsalon (The First German Autumn Salon) in the Berlin gallery Der Sturm. There he met the expressionist painter Franz Marc. In 1914 Baumeister had his first solo exhibition at Der Neue Kunstsalon (New Art Salon) in Stuttgart. In the same year, Adolf Hölzel arranged a commission for wall paintings at the Deutsche Werkbund-Ausstellung (German Werkbund Exhibition) in Cologne for Baumeister, Schlemmer, and Herman Stenner. Prior to being drafted into the army in the summer of 1914 (until 1918), Baumeister travelled to Amsterdam, London, and Paris. During the war, Baumeister met the painter Oskar Kokoschka and the architect Adolf Loos in Vienna in 1915. In 1916 he participated in the exhibition Hölzel und sein Kreis (Hölzel and his Circle) at the Art Association in Freiburg im Breisgau, which was subsequently shown at the Ludwig Schames Art Salon in Frankfurt am Main. In 1918, still prior to being discharged from military service, he threw an exhibition with his friend Oskar Schlemmer at the Galerie Schaller in Stuttgart. Baumeister and Schlemmer campaigned to bring Paul Klee to the Stuttgart Academy, which was rejected by the Academy. Klee, for his part, would have been willing to come. In 1919 Baumeister became a member of the Berlin artist association Novembergruppe (November Group). The group was founded by Max Pechstein in 1918, immediately following Germany’s capitulation and the fall of the monarchy. It remained one of the most important alliances of German artists until 1933.

In Stuttgart in 1919, Baumeister took up the initiative with Schlemmer and other artists to found the artist group Üecht (Alemannic: genuine, true), which he left in 1921. In 1919 he produced his first stage design, which was followed by seventeen others. In 1920 Baumeister completed his art studies, worked as an independent artist, and participated in exhibitions in Berlin, Dresden, and Hagen. His popularity and recognition abroad became evident in a joint exhibition with Fernand Léger in the Berlin gallery Der Sturm in 1922. During these years, Baumeister developed professional relationships with artists such as Paul Klee, Léger, Le Corbusier, Amédée Ozenfant, and Michel Seuphor. In 1924 several of his works were shown at the Erste Allgemeine Deutsche Kunstausstellung (First General German Art Exhibition) in Moscow and, in 1925, he participated in the Paris exhibition L’Art d’aujourd’hui (Art Today). Alongside his artistic work, he was also active in the area of commercial art and designed advertisements for numerous companies, such as Bosch and DLW (Deutsche Linoleumwerke)