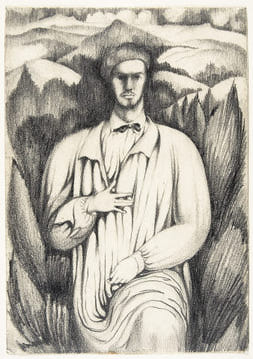 Amadeo de Souza-Cardoso was born in Manhufe (Amarante) and died in Espinho, north of Portugal. In 1906, he left for Paris where he began working as a draughtsman and caricaturist. He became acquainted with frontline artists such as Modigliani, Brancusi, Juan Gris, Max Jacob, Sónia and Robert Delaunay, among others.
In 1913 he integrated the famous exhibition Armory Show in New York and exhibited in Galeria Der Sturm, in Berlin. Amadeo was among the most commercially successful exhibitors at the Armory Show, as he sold seven of the eight works he showed there.
Amadeo met with Antoni Gaudí in Barcelona in 1914, and then left for Madrid, where the shock of World War I was already underway. He then returned to Portugal where he married Lucie Meynardi Peccetto. He maintained contact with many of the most prominent Portuguese artists and poets such as Almada Negreiros, Santa-Rita Pintor and Teixeira de Pascoaes.
Between 1915 and 1916 he became friends with the Sonia and Robert Delaunay who sought exile in Portugal and, by this time, he became an active member of the Portuguese avant-garde group Orpheu . During this period he exhibited in Lisbon and in Porto. In his oeuvre, there are evident influences of artistic movements emerging during this time, such as cubism, dadaism, abstractionism and expressionism.
On October 25, 1918, at the age of 30, he died in Espinho, of Spanish flu.
Even considering his very short life span, Souza-Cardoso was an artist who left an indelible milestone on the history of modern art in Portugal, thanks to his committed and prolific activity, as well as his embrace of the fresh ideas in the art scene of the time, having been inspired by many of the leading art movements of his time.

Amadeo was born in Mancelos, a parish of Amarante. At the age of 18, he entered the Superior School of Fine Arts of Lisbon and one year later (on his 19th birthday) he went to Paris, where he intended to continue his studies but soon quit the architecture course and started studying painting. By then, he was especially experienced in caricatures. In 1908, he lived in number fourteen of the Cité de Falguière. There, he went to ateliers in the Académie des Beaux-Arts and the Viti Academy of the Catalan painter Anglada Camarasa. In 1910 he stayed for some months in Brussels and, in 1911, his works were displayed in the Salon des Indépendants. He became close friends with artists and writers such as Gertrude Stein, Juan Gris, Amedeo Modigliani, Alexander Archipenko, Max Jacob, the couple Robert Delaunay and Sonia Delaunay, and Constantin Brâncuși, as well as the German artist Otto Freundlich. He was also friends with the Italian Futurists Gino Severini and Umberto Boccioni.

In 1913, Amadeo de Souza Cardoso participated in two seminal exhibitions: the Armory Show in the USA, that travelled to New York City, Boston, and Chicago, and the Erste Deutsche Herbstsalon at the Galerie Der Sturm in Berlin, Germany, directed by Herwarth Walden. Both exhibitions presented modern art to a public that was still not used to it. Amadeo was among the most commercially successful of the exhibitors at the Armory Show, as he sold seven of the eight works he had on display there.

Amadeo met with Antoni Gaudí in Barcelona in 1914, and then left for Madrid, where the shock of World War I was already underway. His friend Amedeo Modigliani showed sculptures in his Paris studio. Amadeo returned then to Portugal where he married Lucie Meynardi Peccetto. He maintained contact with other Portuguese artists and poets such as Almada Negreiros, Santa-Rita Pintor and Teixeira de Pascoaes. On 25 October 1918, at the age of 30, he died in Espinho, of the Spanish flu.

His early works, under the tutelage of the Spanish painter Anglada Camarasa, were stylistically close to impressionism. Around 1910, influenced both by cubism and by futurism, he became one of the first modern Portuguese painters. His style is aggressive and vivid both in form and colour and his works may seem random or chaotic in their compositional structure at first sight but are clearly defined and balanced. His more innovative paintings, such as "Trou de la Serrure", resemble collages and seem to pave the way to abstractionism or even dadaism.

In 1912 he published an album with twenty drawings, and copied the story of Gustave Flaubert, “La Légende de Saint Julien to l'Hospitalier”, in a calligraphic manuscript with illustrations, but these early works attracted little notice. In 1913 he exhibited eight works in the Armory Show in the USA, some of which are now in American museums. The following year, he returned to Portugal and initiated a great and meteoric career in the experimentation of new forms of expression.