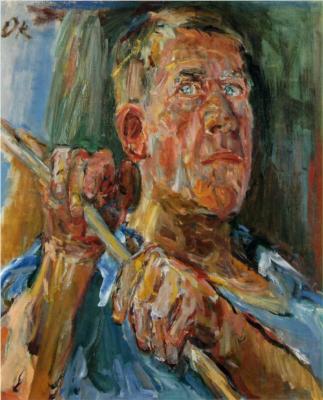 Oskar Kokoschka (1 March 1886 – 22 February 1980) was an Austrian artist, poet and playwright best known for his intense expressionistic portraits and landscapes.

The second child of Gustav Josef Kokoschka, a Czech goldsmith, and Maria Romana Kokoschka (née Loidl), Oskar Kokoschka was born in Pöchlarn. His older brother died in infancy. His sister, Berta was born in 1889; and a brother, Bohuslav, in 1892. Oskar had a strong belief in omens, spurred by a story of a fire breaking out in Pöchlarn shortly after his mother gave birth to him. The family's life was not easy, largely due to a lack of financial stability of his father. They constantly moved into smaller flats, farther and farther from the thriving center of the town. Concluding that his father was inadequate, Kokoschka drew closer to his mother; and seeing himself as the head of the household, he continued to support his family when he gained financial independence. Kokoschka entered a Realschule, a type of secondary school, where emphasis was placed on the study of modern subjects such as the sciences and language. Kokoschka was not interested in such subjects, as he only excelled in art, and spent most of his time reading classic literature during his lessons.

One of Kokoschka's teachers suggested he pursue a career in the fine arts. Against his father's will, Kokoschka applied to the Kunstgewerbeschule in Vienna, now the University of Applied Arts Vienna. He was one of three applicants accepted of 153. The Vienna Kunstgewerbeschule was a progressive school of applied arts that focused mainly on architecture, furniture, crafts and modern design. Unlike the more prestigious and traditional Academy of Fine Arts Vienna, the Kunstgewerbeschule was dominated by instructors of the Vienna Secession. Kokoschka studied there from 1904 to 1909, and was influenced by his teacher Carl Otto Czeschka in developing an original style.

Among Kokoschka's early works were gesture drawings of children, which portrayed them as awkward and corpse-like. Kokoschka had no formal training in painting and so approached the medium without regard to the "traditional" or "correct" way to paint. The teachers at the Kunstgewerbeschule helped Kokoschka gain opportunities through the Wiener Werkstätte or Viennese Workshops. Kokoschka's first commissions were postcards and drawings for children. Later, Kokoschka said that this exercise provided "the basis of [his] artistic training". His early career was marked by portraits of Viennese celebrities, painted in a nervously animated style.

Kokoschka had a passionate, often stormy affair with Alma Mahler. It began in 1912, shortly after the death of her four-year-old daughter Maria Mahler and her affair with Walter Gropius, later a celebrated architect in Berlin. But after several years together, Alma rejected him, explaining that she was afraid of being too overcome with passion. He continued to love her his entire life, and one of his most acclaimed works, The Bride of the Wind (The Tempest; 1913), is expressive of their relationship. The poet Georg Trakl visited the studio while Kokoschka was painting this masterpiece. Kokoschka's poem Allos Makar was inspired by this relationship.