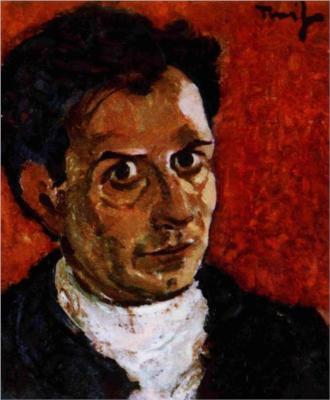 Born in Bârlad, he left his home town in 1902 in order to attend the Iaşi National School of Fine Arts, where he had among his teachers Gheorghe Popovici and Emanoil Bardasare. The following year he visited Italy together with University of Bucharest students of archeology under the direction of Grigore Tocilescu. During that period, together with some of his fellow students, Tonitza painted the walls of Grozeşti church.

In 1908 he left for Munich, where he attended the Royal Academy of Fine Arts; he began publishing political cartoons in Furnica, and contributing art criticism articles to Arta Română. Tonitza spent the following three years in Paris, where he visited artists' studios, and studied famous paintings. Although the young artist's creation would initially conform to the prevalent style, his gift for colour and his personal touch would eventually lead him towards experiment. Throughout his life, he remained committed to the Munich School, hailing its innovative style over the supposedly "obscure imitators of Matisse".

After his return, Tonitza painted frescos in several churches of Moldavia and worked as an art teacher, and then, together with Cezar Petrescu, as editor of Iaşul newspaper. He married Ecaterina Climescu in 1913. The art collector Krikor Zambaccian, whom Tonitza befriended after 1925, indicated that, during its existence, Iaşul sided with the Conservative Party, opposing Romania's entry into World War I.

In 1916, after Romania entered the conflict, Tonitza was drafted into the Army and fell prisoner to the Bulgarians during the Battle of Turtucaia. Interned, he became ill with malaria and rheumatism, which would plague him until his death. He was set free and returned in 1918.

During the 1920s, he was a member of the Arta Română group (alongside Gheorghe Petraşcu and others). His commitment to social commentary is best perceivable in his graphic work, malitious and sometimes dramatical — he sketched for many contemporary, usually political and leftist, magazines: Socialismul (official voice of the short-lived Socialist Party of Romania), Adevărul, Flacăra, Hiena, Rampa, and Scarlat Callimachi's Clopotul —, and in his articles (including the ones in Viaţa Românească and Curentul), which mainly discussed cultural and social events. He became close to the writer and activist Gala Galaction, whose book O lume nouă he illustrated in 1919, and whose portrait ("The Man of a New World") he painted one year later. His first catalog, issued in 1920, was prefaced by the poet and art critic Tudor Arghezi.

In 1921, Tonitza expanded his range, painting prototypes for a ceramics factory, and organizing a ceramics exhibition; the same year, he moved to Vălenii de Munte, and decided to cease contributing to the press. It was at the time that he developed on his characteristic style and themes, both of which, Zambaccian contended, were determined by his experiences as a father.