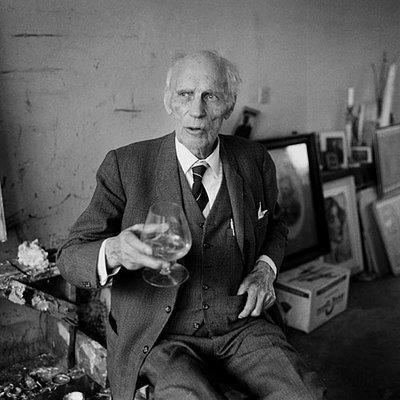 Johannes Sveinsson Kjarval (15 October 1885 – 13 April 1972) was an Icelandic painter. He is by many considered one of the most important artists of Iceland.

Born in poverty, he was adopted and as a young man worked as a fisherman. However, he spent every spare time drawing and painting and managed to learn basics from artist Ásgrímur Jónsson. At age 27 with financial support from fishermen and the Icelandic Confederation of Labour he passed an entrance examination and was admitted to the Royal Danish Academy of Fine Arts for higher education in the arts where he completed his studies. During the Copenhagen years he became acquainted with various styles including impressionism, expressionism and cubism but he also became an accomplished draughtsman. Later he also took shorter trips to France and Italy.

Kjarval was a prolific painter, leaving thousands of drawings and paintings after a long life. The paintings vary greatly in style and frequently mix different styles into a very personal style. Although not surreal, some of his works include absurd and symbolist elements mixing elves and myths into landscape. Many of his works include Icelandic landscape and lava formation but many of his landscape paintings are partially "cubist" and abstract with his focus on zooming on the closest ground and less the impressive mysterious mountains in the background. Later in his life his art frequently also included abstract painting.

Because of the unique mix of styles, it is an oversimplification to classify him has a landscape painter. His work includes expressionist, abstract, cubist, landscape and portrait paintings and drawings - and his "style promiscuity" was highly original as the man himself was. He was a highly original modernizer of his time and still remains quite unique among Icelandic and world painters. In 1958 he was awarded the Prince Eugen Medal by the King of Sweden.