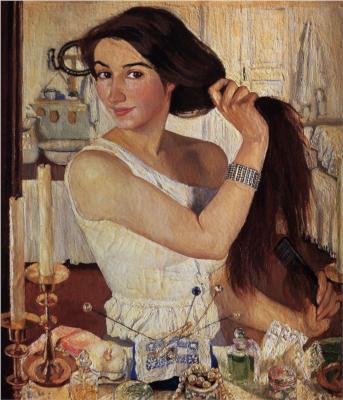 At the Dressing-Table. Self-portrait - Zinaida Serebriakova

Zinaida Serebriakova was born on the estate of Neskuchnoye near Kharkov (now Kharkiv, Ukraine) into one of the most refined and artistic families in the Russian Empire.

She belonged to the artistic Benois family. Her grandfather, Nicholas Benois, was a famous architect, chairman of the Society of Architects and member of the Russian Academy of Science. Her uncle, Alexandre Benois, was a famous painter, founder of the Mir iskusstva art group. Her father, Yevgeny Nikolayevich Lanceray (Wikidata), was a well-known sculptor, and her mother, who was Alexandre Benois' sister, had a talent for drawing. One of Zinaida's brothers, Nikolay Lanceray, was a talented architect, and her other brother, Yevgeny Yevgenyevich Lanceray, had an important place in Russian and Soviet art as a master of monumental painting and graphic art. The Russian-English actor and writer Peter Ustinov was also related to her.

In 1900 she graduated from a women's gymnasium (equivalent to grammar school or high school), and entered the art school founded by Princess Maria Tenisheva. She studied under Repin in 1901, and under portrait artist Osip Braz between 1903 and 1905. In 1902–1903 she spent time in Italy, and from 1905 to 1906 she studied at the Académie de la Grande Chaumière in Paris.

In 1905, she married her first cousin, Boris Serebriakov, the son of Evgenyi's sister, and took his surname. Serebriakova went on to become a railroad engineer.

From her youth onwards, Zinaida Serebriakova strove to express her love of the world and to show its beauty. Her earliest works, Country Girl (1906, Russian Museum) and Orchard in Bloom (1908, private collection), speak eloquently of this search, and of her acute awareness of the beauty of the Russian land and its people. These works are études done from nature, and though she was young at the time, her extraordinary talent, confidence and boldness were apparent.

Broad public recognition came with Serebriakova's self-portrait At the Dressing-Table (1909, Tretyakov Gallery), first shown at a large exhibition mounted by the Union of Russian Artists in 1910. The self-portrait was followed by Girl Bathing (1911, Russian Museum), a portrait of Ye.K. Lanceray (1911, private collection), and a portrait of the artist's mother Yekaterina Lanceray (1912, Russian Museum), already mature works, strict in composition.

She joined the Mir iskusstva movement in 1911, but stood out from the other members of the group because of her preference for popular themes and because of the harmony, plasticity and generalized nature of her paintings.

In 1914–1917, Zinaida Serebriakova was in her prime. During these years she produced a series of pictures on the theme of Russian rural life, the work of the peasants and the Russian countryside which was so dear to her heart: Peasants (1914–1915, Russian Museum), Sleeping Peasant Girl (private collection).

The most important of these works was Bleaching Cloth (1917, Tretyakov Gallery), which revealed Zinaida Serebriakova's striking talent as a monumental artist. The figures of the peasant women, portrayed against the background of the sky, gain majesty and power by virtue of the low horizon.